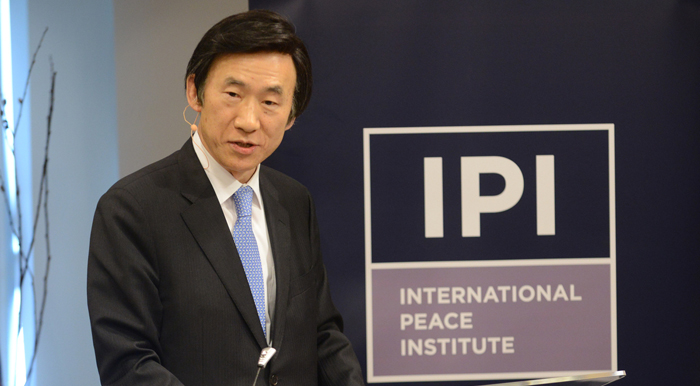 South Korea’s Foreign Minister Yun Byung-se says a military conflict could be in the cards in northeast Asia, a region plagued by historical, regional, and security-related tensions, and he warned that the cost of keeping and testing nuclear weapons will be so high that it could threaten the survival of North Korean leader Kim Jong-un’s regime, news agencies reported.

Speaking at the International Peace Institute in New York on May 6th, Yun expressed his grave concern over the increasing rivalry in northeast Asia, according to Arirang News, an English language network in South Korea.

He noted China’s emerging power, Japan’s aim to make a comeback as a regional power, and Russia taking a tougher stance against the West.

Mr. Yun said that this, coupled with North Korea’s ongoing nuclear threats, is creating serious changes to the geopolitical sphere of northeast Asia as well as to the Korean peninsula.

“Misguided nationalism is rearing its ugly head in the form of historical revisionism, or even denialism, thereby prolonging the tension among countries in the region,” Mr. Yun said, according to The Korea Times.

Mr. Yun told a standing-room audience of diplomats, UN officials and Korea-watchers that the North will pay “the heaviest price” in new sanctions if it defies the international community and goes ahead with a new nuclear test, reported Associated Press correspondent Edith Lederer.

Many experts—and the South Korean government—had suspected the North would conduct its fourth nuclear test during President Barack Obama’s recent visit to Seoul. North Korea has said it still may go ahead and test a new kind of nuclear device following Obama’s visit.

“Our assessment is that North Korea is ready to undertake a test whenever they make the necessary political decision,” Mr. Yun said.

News broadcaster CNN, quoting a senior US official, reported Monday that a tarp has been set up at the tunnel entrance of North Korea’s northeastern nuclear test site of Punggye-ri, indicating that test preparations are in their final stages.