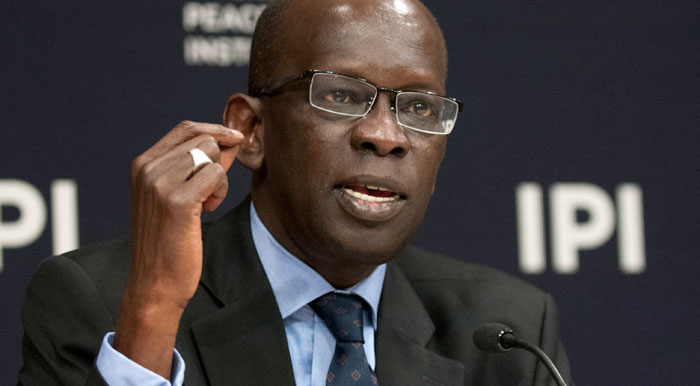 Abdou Dieng, the former Senior Humanitarian Coordinator for the Central African Republic (CAR), said at IPI that relocation within the country is currently the only option for thousands of civilians who must choose between moving or facing death.

Speaking at the latest of IPI’s Humanitarian Affairs Series events on May 15th entitled “Central African Republic: A Forgotten Crisis under the Spotlight,” Mr. Dieng, who only recently stepped down from his post as top coordinator of the UN humanitarian response to the crisis in CAR, offered his analysis of the situation on the ground and provided some recommendations on how to move forward with the international effort.

“These people only have two choices,” Mr. Dieng said. “One is to stay where they are and be killed, the second is to be moved within their own country with the support of the international community.”

So far, Mr. Dieng said, civilians have been the ones to raise the idea of relocation. “It’s not us telling them to relocate,” he said. “The decision comes from them.”

The conflict in CAR began at the end of 2012, but since December 2013, the situation has deteriorated dramatically as the war has taken on a sharper sectarian and inter-confessional dimension. According to news reports, Christian militias known as anti-Balaka have attacked Muslim Seleka groups and their communities in a systematic manner, forcing many of them to flee, sometimes into neighboring countries. The violence has gone both ways.

Despite the recent spike in violence, Mr. Dieng said that the crisis is the result of years of tensions that simply erupted at the end of 2013.

“This crisis started decades ago, and it just took another dimension when the anti-Balaka began attacking the towns of Bangui and Bessangoa” at the end of last year, he said. “But over the last [ten years] everybody knew that this country was falling apart.”

There are currently 2.5 million people who are in need of assistance, Mr. Dieng said, and 900,000 people have already been relocated within the country or to neighboring Chad, Cameroon, and the two Congos.

Mr. Dieng also warned that the humanitarian crisis is slowly becoming a security and economic one, as civilians face increasing difficulties getting food and water, and as the violent struggle between the two armed groups becomes harder to contain.

“But despite all this,” he said, “it is still difficult to control the armed groups.”

“These killings tell us how severe the situation is. The only hope we have is the deployment of [UN] blue helmets,” Mr. Dieng said, “which we don’t believe will happen anytime soon.”

Last month, the UN Security Council approved the deployment of an additional 12,000 troops to complement the current international effort. But Mr. Dieng said that their effective deployment to the ground is unlikely to take place until next fall.

“From now until September, we have a vacuum in which we need to continue protecting civilians,” he warned. Usually, protecting people in humanitarian crises means providing food and water, Mr. Dieng said. But in this context, “it means preventing people from being massacred and killed.”

In addition, the next few months coincide with the rainy season in the country, which is going to make the situation even more problematic, Mr. Dieng said.

“During the rainy season you have very poor road infrastructure, and everything is going to be much more complicated,” he said. Even if there were no crisis in the country, he said, this is going to be one of the most challenging times for the people of the Central African Republic.

“This is the time in which they have exhausted all of their resources, waiting for the next harvest to come.”

While thousands of civilians continue being relocated within the country or to neighboring states, the ultimate goal is their safe return to their homes, Mr. Dieng said. Under no circumstance, he noted, should they remain outside the Central African Republic.

“They must come back so that they can take part in the elections,” he said. Otherwise, election results would be doubted, potentially fueling additional unrest, he indicated.

Listen to the Global Observatory interview with Abdou Dieng>>