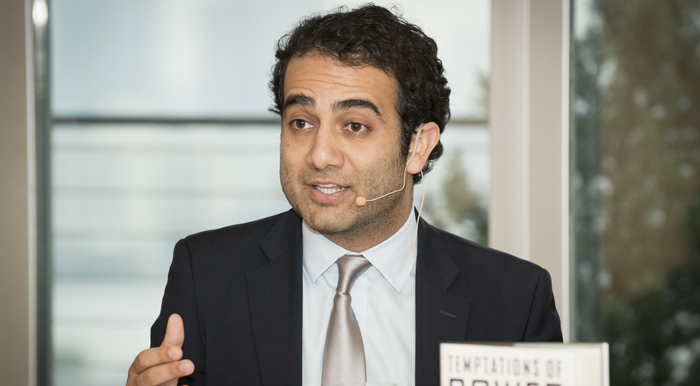 Author Shadi Hamid made this prediction in an IPI Distinguished Author Series event on May 22nd featuring his book Temptations of Power: Islamists and Illiberal Democracy in a New Middle East.

The Muslim Brotherhood, now repressed with many of its leaders in jail, will “bounce back,” he said, because the current effort to “eradicate” it will fail, and the organization is practiced at awaiting the moment when it is able to reenter politics.

“You can try to kill an organization, but killing an idea is an altogether different matter,” he said. “And these groups represent real ideas that have real support.”

In June 2012, Mohamed Morsi, a leading member of the Muslim Brotherhood, became the first democratically elected president of Egypt. After a year in office marked by economic upheavals, he was ousted in July 2013 in a military coup that enjoyed popular support. Since then, hundreds of Muslim Brotherhood exponents, including Mr. Morsi himself, have been jailed and are facing trial.

Mr. Hamid’s comment exemplified an argument he puts forth in his book—that Islamists follow the path of liberal democracy as long as it provides them a way of getting elected but then, once in power, turn away from it to pursue illiberal democracy as their model of governance.

Mr. Hamid, who is currently a fellow at the Brookings Institution in Washington, D.C., said that because of both structural and ideological reasons, democracy is more likely to push Islamist parties further to the right toward greater illiberalism.

This happens primarily for two reasons, Mr. Hamid argued. First is the “deep conservatism” of Arab societies. Citing a series of Pew, Gallup, and Arab Barometer polls, Mr. Hamid said that in 2011, 74% of Egyptians believed Sharia law should be the official law of the land, and that in 2010, 62% of Jordanians supported a system governed by Islamic law with no parties or elections.

This conservatism then leads to the second reason, Mr. Hamid said. Once in power, Islamist parties are pressured by their base to implement conservative policies. “[They] have to go back to their supporters and say, ‘Here’s something Islamic’,” he said.

Calling this the “tea-party effect,”—referring to the American far-right movement of that name—Mr. Hamid said that such systems are less prone to compromise and tend to facilitate the proliferation of ideological parties, effectively creating illiberal democracies.

Mr. Hamid acknowledged that the idea of an illiberal democracy is somehow alien to the West, because of “our belief that liberalism and democracy go hand in hand.” But in the Middle East this is not the case, he said, because Islamists there would say that they cannot fully express their Islamism in a strictly liberal or secular regime. “I would say that for democracy to flourish in the Middle East, we will probably have to accept some degree of illiberalism.”

The alternative, Mr. Hamid said, is the current situation in Egypt, namely an attempt by the government to “eradicate” the Muslim Brotherhood. According to Mr. Hamid, the Egyptian government’s approach is a “fool’s errand” that is doomed to fail.

Eventually, the Muslim Brotherhood will wait for a political opening and re-enter the system once the opportunity allows it, Mr. Hamid said. It might take many years, he said, but “they really believe that they’re going to win out in the end and that it’s just a matter of time, and I think they will do quite well.”

Mr. Hamid added that the current inability of Gen. Abdel Fattah al-Sisi to bring stability back to the country is already laying the foundations for the Brotherhood’s comeback. “Many Egyptians will sour over time, and the Muslim Brotherhood will wait for the opportunity to bounce back,” he said.

Asked whether Tunisia’s transition differs from the situation in Egypt, Mr. Hamid conceded that Ennahda’s decision to step down from power was an unusual move. But he also warned against an over-characterization of Tunisia as an exception to his theory.

The country experienced forced secularization for decades at the hands of the French, Mr. Hamid said. “The French cultural influence is still very much there,” he said, “and this means that Islamists would have to be respectful of certain limits there.”

French influence aside, Mr. Hamid predicted that if Tunisia’s Islamists keep on winning elections and decide to hold onto power instead of relinquishing it, this could create future tensions like the ones plaguing Egypt.

“If Islamists win the next scheduled elections, are the secularists going to accept this?” he asked.