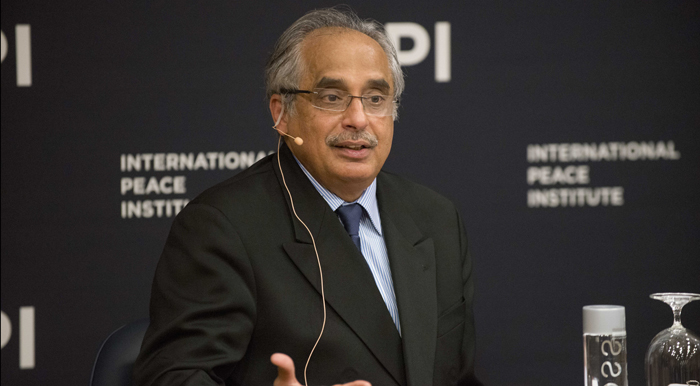 Special Adviser to the Secretary-General on Myanmar Vijay Nambiar said that over the past four years, the country has achieved remarkable progress in terms of democratic and political reform, but that ethnic tensions between the Buddhist majority and the Muslim minority still pose a serious threat to Myanmar’s path to reform and stability.

At a presentation hosted by the International Peace Institute (IPI) on May 1st, Mr. Nambiar highlighted the recent developments that have gradually turned the country from a closed, military dictatorship into a relatively more open society with a functioning constitution and a government that is promoting political and economic reform.

“Myanmar today is in the vortex of many transitions,” Mr. Nambiar said, and all are “happening at the same time, but coming from different directions, affecting different people differently, and causing unforeseen impacts on individuals, communities, and institutions.”

However, Mr. Nambiar also warned that the recent rise in tensions between the Buddhist and Muslim populations could seriously “undermine the entire reform process.”

Both sides, he noted, share a strong feeling of victimhood, with Muslim communities being “acutely conscious of their persecution and…discrimination at the hands of the majority community,” and the Buddhist population being deeply susceptible to what they believe is the disproportionate international support enjoyed by the local Muslim groups.

The growing tensions are due to several factors, but Mr. Nambiar said that most of the upheaval is seen by people in Myanmar as the result of the “threat posed to Buddhist identity by a progressive permeation of Muslim culture and religious practices.”

Part of the social and inter-communal discontent can also be attributed to the dire economic situation affecting the country, he indicated.

According to Mr. Nambiar, Myanmar’s per capita income is half that of neighboring Bangladesh, which is one of the lowest in southeast Asia. In addition, over 70% of the country’s population lives in rural areas, making access to development resources an even greater test for the government, Mr. Nambiar said.

The challenge of ensuring access to resources for such large portions of the rural population goes back to a long-standing trait in Myanmar’s society, namely the strong divide between the center and the periphery, or what Mr. Nambiar called the issue of “devolution.”

“This has been a historic challenge in Myanmar,” Mr. Nambiar said. Any successful evolution in democracy or even development, he warned, will necessarily hinge on the extent to which power will be devolved to the periphery.

In that regard, the government is slowly moving toward a more open discussion of the different needs of the peripheral communities. But, Mr. Nambiar said, “this is not going to be a very easy process.”

Despite the numerous challenges still facing the country, Mr. Nambiar also pointed to some promising signs.

Nobel Peace Laureate Aung San Suu Kyi–the iconic human rights activist who has been jailed multiple times for demanding more political freedom–is now part of the parliamentary opposition. Additionally, the country has held one flawed and one free election over the past few years, and is preparing for a new one in 2015, Mr. Nambiar noted.

The strong and hierarchical executive power inherited from decades of military rule is also slowly disappearing, Mr. Nambiar said, making room for a more confident exercise of bureaucratic authority at all government levels.

According to Mr. Nambiar, these positive developments ought to be recognized and commended.

“I believe the overall picture of reform in the country is real,” he said, “and the commitment of its leaders is firm.”

In a recent book published by IPI, A Good Office? Twenty Years of UN Mediation in Myanmar, a final chapter asks whether Mr. Nambiar will be the last envoy for Myanmar.

When the moderator, Senior Adviser for External Relations Warren Hoge, posed the same question, Mr. Nambiar responded: “I hope I am.”