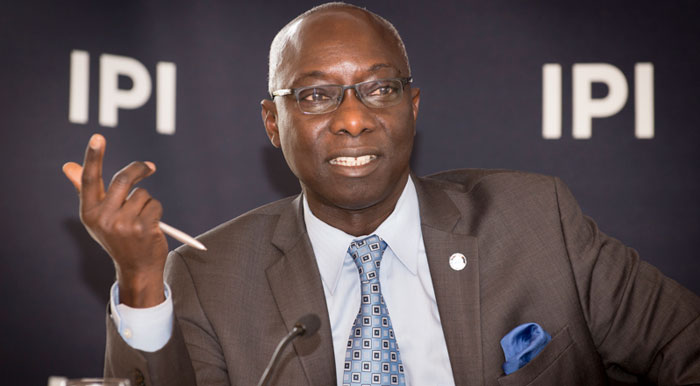 A top UN official and a leading human rights activist said at IPI that criticism depicting the International Criminal Court (ICC) as biased against Africa is unfounded, and urged African states to step up their support for the court’s fight against mass atrocities worldwide, but they also acknowledged that Africa’s contentious relationship with the ICC stems from centuries of colonial rule and a strong perception of bias.

During a May 13th IPI forum entitled “The ICC and Africa,” Adama Dieng, Under-Secretary-General and Special Adviser to the Secretary-General on the Prevention of Genocide, and Richard Dicker, Director of the International Justice Program at Human Rights Watch, shared their views on how African states can improve their relationship with the ICC. While both speakers recognized that all of the court’s caseload has so far emanated from Africa, they also agreed that some states’ allegations of the court’s bias are unfounded.

“All of the court’s investigations have been in Africa, and all its defendants in custody are Africans,” Mr. Dieng said. “Of course, this has led to the accusation that the ICC is biased against Africa, but those accusations do not bear scrutiny,” Mr. Dieng said, noting that they are largely a matter of perception.

At the same time, both speakers acknowledged that the continent’s hostility toward the ICC is the result of long years of colonialism during which mass atrocities and human rights violations went largely unpunished. This has created, the speakers indicated, a perceived feeling among African states of discrimination and hostility.

“The contention emanating out of Africa has been exacerbated by centuries of colonial rule marked by some of the most brutal practices imaginable for which there never was any accountability,” Mr. Dicker said. This impunity, he said, has given more resonance than is deserved to the narrative that the ICC was created to persecute African leaders.

“We all know the facts do not sustain that narrative,” he said, “but that’s the one we hear.”

Instead, the panelists urged both African Union (AU) states and ICC state parties to change this perception of bias by broadening the court’s caseload to include cases emanating from outside the continent.

“France will [soon] introduce a resolution referring the situation in Syria to the ICC,” Mr. Dicker said. “I would urge African states that have criticized the court to lend a hand in bringing justice to victims in Syria and helping break out of the [court’s] African focus.”

So far, both African states and the rest of the international community have failed to respond to the urgency of the Syrian crisis, the speakers said.

“The international community is failing to protect the people of Syria,” Mr. Dieng said. “Yet, it is also failing to refer the case to the ICC.”

Mr. Dicker also noted that referring North Korea’s regime to the ICC for recent allegations of gross human rights violations, added to the potential ratification of the ICC treaty by the Palestinian state, are both opportunities that, if supported by the AU, could further broaden the court’s workload.

For now, however, Mr. Dieng said that the majority of African Union states are looking for ways to strengthen their own regional judicial systems, in the hope that there will no longer be a need for the ICC.

“The dream is that one day the ICC will no longer have any case before it,” Mr. Dieng said. That day will only come, he added, by supporting the AU’s commitment to strengthening regional judicial systems that can operate independently from the ICC.

In that regard, Mr. Dieng praised the AU’s recent establishment of the Commission of Inquiry on South Sudan as a “historic decision” and a “bold step” that ought to receive widespread support.

“For the first time, the African Union is saying ‘we are no longer going to allow atrocities being committed while we sit without doing anything’,” he said.

Listen to the Global Observatory interview with Richard Dicker>>