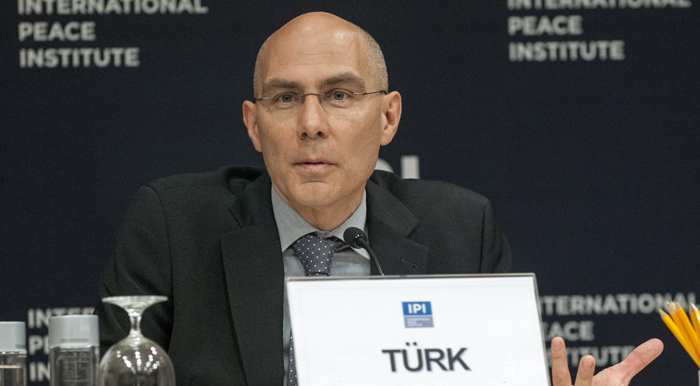 Volker Türk, Director of International Protection at the UN Office of the High Commissioner for Refugees (UNHCR), told an IPI audience that rudimentary state structures and immediate life-threatening situations make the forced relocation of civilians the “measure of last resort” for the humanitarian community.

Only a little over ten days ago, when the last convoy of Muslims left Bangui in the Central African Republic (CAR), news reports suggested that French troops and UNHCR workers had offered to escort their safe passage. A question arose from the audience at IPI of whether the UNHCR was inadvertently facilitating ethnic cleansing in CAR by protecting the movement of Muslims.

Speaking on May 22nd at an event entitled “Protection Challenges in Current Conflict Situations,” Dr. Türk drew on his recent visits to CAR, South Sudan, and Syria and said that the forced displacement of civilians is a necessary last choice for organizations like UNHCR, which is devoted to saving as many lives as possible.

With the displacement of thousands of civilians, both internally and externally, comes also the challenge of protecting these movements from violent attacks, Dr. Türk said. Citing data from the Internal Displacement Monitoring Centre (IDMC), Dr. Türk said that the vast majority of forced displacements today occur as a result of violent conflict. This means that the physical threat for civilians does not end with the abandonment of their homes, but can follow them throughout their perilous journeys.

“This poses incredible dilemmas for us when it comes to the types of things we are or aren’t able to do,” Dr. Türk said. The humanitarian community can help during these crisis situations, but it cannot ultimately address the causes that give rise to conflict.

Recalling his recent visit to CAR, Dr. Türk said the country reminded him of a Hobbesian state of nature where the total absence of state structures has created a situation of “war of all against all.” And it is in these kinds of crises, he said, that the limits of the humanitarian community are most visible.

“If it weren’t for the French troops there, I think a massacre would break out immediately,” he said.

Currently, CAR, South Sudan, and Syria are the three most critical crises the humanitarian community is seeking to address, Dr. Türk said. According to the IDMC, the Syrian war has led to the forced displacement of 6.5 million people. Across the globe, 30,000 people flee a country every day as a result of violent wars, Dr. Türk said.

One of the most unfortunate trends, Dr. Türk said, is the protracted nature of displacements. As conflicts extend over time, refugees increasingly feel that returning home will be too dangerous, he said. “We have seen a very steady decline in refugee returns because of this.”

And as civilians spend months and years as refugees away from home, their socio-economic status deteriorates. Dr. Türk spoke of the difficulty of securing a proper education for children, as well as of preventing sexual- and gender-based violence. Often, refugees suffer what he called “multiple displacements,” as they are moved from one region to another repeatedly.

The international humanitarian community has sought to respond to the current refugee crises in various ways, and Dr. Türk praised the generosity of countries like Lebanon, Jordan, Turkey, and of states surrounding CAR and South Sudan.

“Yet, that generosity cannot last year after year especially when countries are affected by these massive influxes as we have seen in Syria,” he warned. In that regard, Dr. Türk urged the international community to renew its solidarity through funding, help, and the recognition that displacement is indeed a problem.

“We will not be able to keep the protection and asylum space for people who are in desperate need if we do not have that international solidarity,” he said.

Listen to the Global Observatory interview with Volker Türk>>