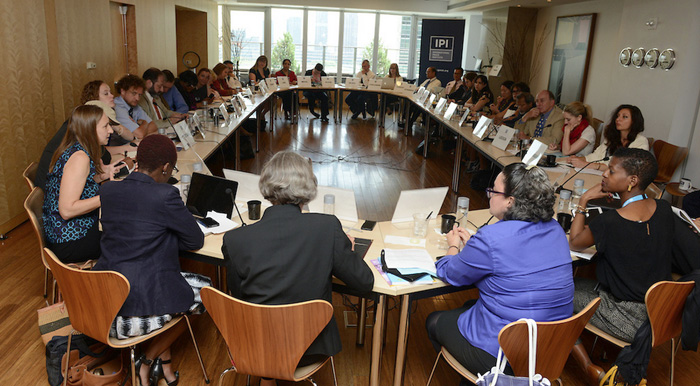 Today, half the world’s population lives in cities, and experts estimate that by 2030, more than three quarters of the world’s population will live in urban areas. But this fast urbanization trend comes at a high cost, experts note, as cities are simultaneously becoming nests for violence, crime, poverty, and high levels of income inequality.

This development and what to do about it was the basis of a June 16th roundtable seminar held at IPI called “Building Urban Resilience in Cities Under Stress.” The seminar brought together experts and practitioners from the development field to discuss progress on a research project co-funded by IPI and the Institute for South Asian Studies (ISAS), a research institute at the National University of Singapore.

“On one hand, you have urbanization as a source for progressive development,” said IPI Policy Analyst Andrea Ó Súilleabháin. “But on the other, it creates risks of chronic insecurity and underdevelopment among the urban poor.”

As people move to cities in search of jobs and better living standards, local institutions are unable to provide that type of infrastructure that can help both cities and new city dwellers deal with the pressure. Urbanization is a popular trend, and it is happening quickly, the experts said.

Homicide rates are much higher in cities than in rural areas, and one third of people living in urban centers live under the poverty line, Ms. Ó Súilleabháin noted. Unfortunately, she added, fragile cities—those urban centers that lack adequate infrastructure—also lack the capacity to deal with these new risks. “In other words, fragile cities lack resilience,” she said.

A key purpose of the seminar was to highlight best practices and approaches that can help fragile cities build that level of resilience that can help them cope with fast urbanization rates across the world.

Filiep Decorte, Chief Technical Adviser at UN Habitat, said that one problem with the global response to this trend is that across UN offices and member states, there is still very little understanding of cities and their complexities.

“We need to understand cities, their special reality, and the social, political, economic, and environmental forces that shape them,” he said.

A more thorough understanding of cities and the way they function can lead to the ultimate objective of “harness[ing] the potential of urbanization for sustainable development,” he said.

In that regard, one of the objectives behind the IPI-ISAS project is to foster a better understanding of cities that are under stress and to find ways to emphasize the positive effects of urbanization as opposed to its negative ones. The obvious starting point, the panelists noted, is better communication with state institutions in an effort to help them deal with the challenges they face.

Perhaps the greatest of these is the high incidence of violence, which, as the panelists noted, is the consequence most commonly associated with urbanization and is one that people feel affects them the most.

Jennifer Salahub, Senior Program Officer at the International Development Research Centre (IDRC-CRDI), emphasized the very local nature of violence and noted that strong state institutions are essential in creating a feeling of security among city dwellers.

“The violence that affects people most is not the catastrophic type,” she said, citing data from a recent survey conducted in Pakistan in which people were asked how they viewed large-scale violence like bombings and terrorist attacks. “Instead, people feel much more threatened by more banal and everyday violence, such as the youth on the street corner looking menacing, or strangers who come through the community.” And this, she said, is where state institutions can play an important mediating role.

Iftekhar Ahmed Chowdhury, Principal Research Fellow at ISAS and the former Permanent Representative of Bangladesh at the United Nations, acknowledged that many challenges remain. But he also expressed hope that initiatives such as this and other projects will eventually lead to a better understanding of urbanization and its potential for economic growth.