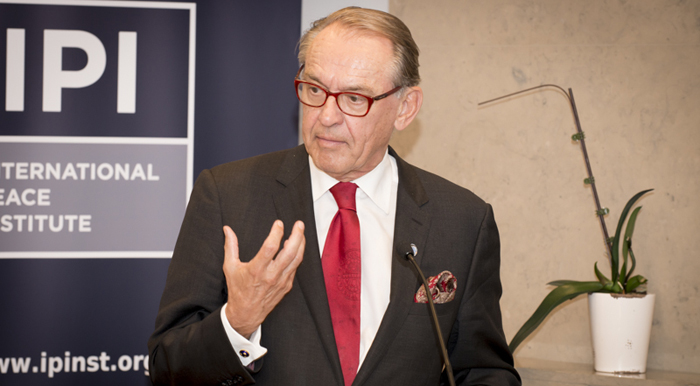 With the Central African Republic (CAR) steeped in ethnic and inter-religious violence, a group of UN officials, government representatives, and members of civil society gathered at IPI on June 23rd and discussed the best way forward for the war-torn country. They concluded that only a joint international peacebuilding effort that includes the UN, member states, and most importantly CAR itself, can stop the country from relapsing deeper into conflict.

Speaking at a policy forum entitled “Relapse into Conflict: The Central African Republic and the Future of UN Peacebuilding” and organized jointly by IPI, the UN Peacebuilding Support Office, and the Permanent Mission of Italy to the UN, the panelists recognized that although the international military response to the crisis in CAR came relatively late, a successful peacebuilding approach could still restore peace to the country.

“A religious clash is being exploited by the parties for political ends and it is leading to a de facto breakup of the country along ethnic and religious lines,” said Sebastiano Cardi, the Permanent Representative of Italy to the UN. Mr. Cardi praised international efforts under the UN Multidimensional Integrated Stabilization Mission in the CAR (MINUSCA) mandate, but said the response should not be limited to military deployment.

“Military deployment is not enough, and we have to keep on thinking about the Central African Republic from a peacebuilding perspective,” he said.

In that regard, the participants praised the creation of the UN Peacebuilding Commission in 2005 as the right step toward a stronger emphasis on peacebuilding as a key feature of the UN system.

“The Peacebuilding Commission is an expression of international solidarity,” established “as a mechanism which is to ensure that for countries emerging from war, post-conflict does not mean post-engagement by the international community,” said UN Deputy Secretary-General Jan Eliasson.

However, Mr. Eliasson also acknowledged that the UN and its member states acted perhaps too late in the case of CAR.

“I must admit,” Mr. Eliasson said, “that in the case of the Central African Republic, we did not act on early warning, but acted on late warning.” The international response was able to prevent the worst forms of atrocities, he said, but some type of religious cleansing still took place.

The forum took place against a backdrop of increasing violence in the Central African Republic. Tensions escalated in early 2013, after Muslim Seleka militias overthrew President François Bozizé and took control of the capital Bangui. Since then, the country has been plagued by an inter-confessional struggle with the Seleka on one side, and Christian Anti-Balaka militias on the other.

Michel Djotodia then seized control of the country in a coup with Seleka support in August 2013, but failed to stop the violence and was later forced to resign, leaving his post to the current interim-President Catherine Samba-Panza. So far, over half a million people have been internally displaced due to the ongoing violence.

All participants agreed that one way to strengthen the response to the crisis in CAR and to improve peacebuilding efforts elsewhere is to ensure national ownership and capacity in conflict-ridden states. If locals themselves are encouraged to bring out and develop their resources and capabilities, they will be able to empower themselves and will have better chances to achieve peace.

“National ownership is the single most important source of the political will for peace,” said João Honwana, Director of the Africa II Division in the UN Department of Political Affairs. “And to the extent that we fail to ensure this national ownership, we are jeopardizing the creation of this political will.”

Mr. Honwana said that very often, the UN and the rest of the international community fail to identify the few resources that exist in countries such as CAR, which, if mobilized properly, would improve the overall peacebuilding effort.

“If we look at our track record in the Central African Republic in light of the requirements of peacebuilding, we will be forced to recognize that we hardly meet any one of the criteria that we established for ourselves,” he said.

Emilie Béatrice Epaye, a member of CAR’s National Transitional Council, said that the international community’s peacebuilding efforts would be better served by paying attention to the traits that are already present in CAR’s society itself.

For instance, she noted, foreign armed forces are entering the country to sell their services to those who are looking to gain power there. The right peacebuilding response would have to look at ways to stop this from taking place by engaging locals and diverting their attention from such transactions. “The real efforts toward peace must come from below, from the people,” she said.

Despite the difficult situation currently facing CAR and its population, the forum expressed some optimism about the way forward.

Andrea Bartoli, the Dean of the School of Diplomacy and International Relations at Seton Hall University, said that the transitional government headed by Ms. Samba-Panza is already a positive sign.

“My impression is that this president did not come to power with an army, and she is not treating the country as her personal property,” he said. Instead, she represents the first attempt to create inclusive politics, and her efforts should be encouraged, he said.

The UN is currently readying the deployment of 12,000 troops under MINUSCA’s mandate, due to take place in September 2014. Ambassador Omar Hilale of Morocco hailed this new deployment.

“Although late, MINUSCA’s arrival will bring hope to the country,” as well as to the entire region, he said. Indeed, Mr. Hilale pointed to how the current unrest in CAR has not only destabilized the country’s neighbors, but also the Sahel and the Maghreb, where terrorist threats have been particularly acute.