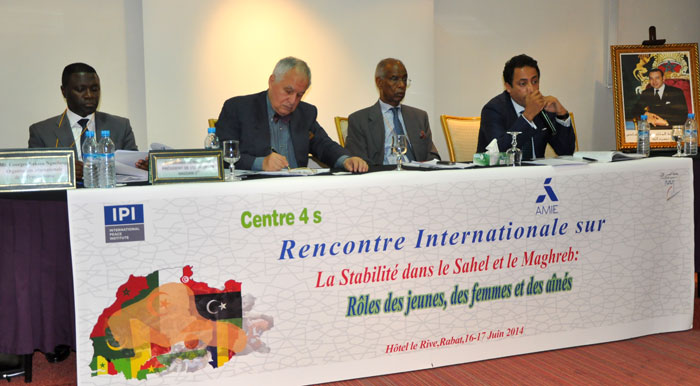 To counter the pervasive insecurity and violence in the Sahel and Maghreb regions, and address the political, social, and economic marginalization that have been driving them, it is urgent to devise strategies that send reassuring messages to the beleaguered populations living in these regions. This was the key message that emerged from a regional seminar organized by IPI on June 16-17, 2014 in Rabat, Morocco, in collaboration with the Hassan Premier University of Settat, the Moroccan Association for Economic Intelligence, and the Center for Strategies for Security in the Sahel Sahara (Centre 4S).

The regional meeting brought together more than thirty representatives of women, youth, elders, and the private sector from Burkina Faso, Chad, Mali, Niger, and Senegal, and from Algeria, Libya, Mauritania, Morocco, and Tunisia. These groups examined their existing and potential contributions to ongoing efforts to advance peace and development in the Sahel and the Maghreb.

• Years of poor governance and absence of the rule of law have led to a blurring of the lines between state and power in most countries in the Sahel Sahara, resulting in the state being exposed each time there is a change of government. Popular distrust of the state that intimidates rather than protects and serves calls for improved political and economic governance. It also requires rebuilding a healthier state-citizen relationship.

• Beyond security responses, prosperity and regional integration are important factors of stability in the Sahel and the Maghreb. Anchoring countries of the region into the global economy is an equally important priority.

• Effective implementation of the various provisions of the international women, peace, and security agenda, their proper monitoring at national, regional, and international levels, and their periodic review, should strengthen women’s protection and enhance the chances of their participation in conflict prevention and peace processes across the Sahel and the Maghreb. These efforts should be combined with women’s capacity-building initiatives in mediation and leadership skills, for example, and the development of political programs that prioritize women’s needs and perspectives.

• Clear and sustainable incentives for peace must be developed and offered to disenchanted youth, whose energy can easily be captured by extremist ideologies, terrorist groups, and by arms, drug, and human traffickers across borders. Such incentives consist of education—including on the universal, peace-oriented values espoused by Islam, training and the provision of employment opportunities, as well as meaningful public participation.

• The revalorization of traditional fora of knowledge and value transmission can facilitate an intergenerational dialogue between the elders and the younger members of the society. Such dialogue can include sharing of experiences across countries in the region, shedding light on the mediation role played by elders in conflict prevention and the peaceful settlement of disputes, their advisory roles, and their contributions to religious tolerance and social cohesion.

• Visionary and ethical leadership, which begins within economic enterprises, can also contribute to building social cohesion and a culture of peace. For example, multinational companies can exercise their corporate responsibility by increasing employment opportunities for local youth or by developing accompanying projects in communities where local populations still lack the necessary skills to be employed. Additional initiatives can build bridges between the private sector and communities, by advocating legal protection for, and providing support to, workers in informal sectors, most of whom are women.

• Governments, which have yet to seize the opportunities offered by technology to develop agriculture across the Sahel and the Maghreb, can provide incentives to business owners to invest in remote areas of the region. Meanwhile, small business owners also have the responsibility to seek and take advantage of the public and private training opportunities made available for them to actively contribute to local development efforts.

• Civil society organizations can play an important role in the harmonization and dissemination of a message of peace in the region. This can be done by coordinating their diverse initiatives to increase effectiveness; by meeting regularly and advocating for the implementation of clear and concrete policy recommendations; and by actively engaging the media.