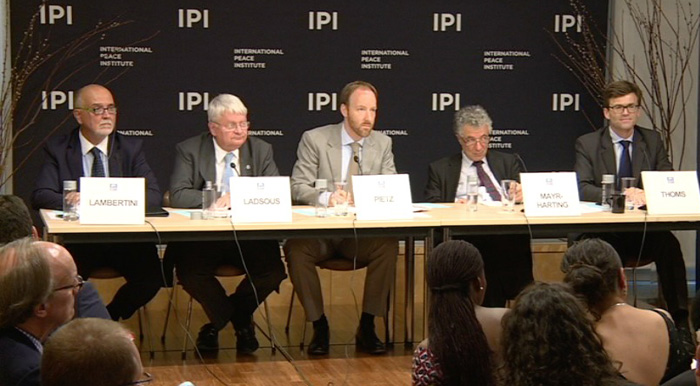 The European Union is among the strongest supporters of UN peacekeeping missions around the globe, but the growing challenges faced by UN-led operations have raised the need for better EU-UN cooperation, both on the ground and at the planning level.

This is what emerged from a July 17th policy forum entitled “EU-UN Partnership in Peace Operations: Lessons Learned and the Way Forward” organized jointly by IPI and the governments of Germany and Italy. The event marked the New York launch of a six-month-long project that coincides with the Italian Presidency of the Council of the European Union. The venture will see Germany and Italy working with researchers and policymakers on ways to improve EU-UN cooperation in peacekeeping.

“Cooperation between the UN and the EU in conflict prevention and management has become a major component of global security governance today,” said Inigo Lambertini, Deputy Permanent Representative of Italy to the UN. “New York and Brussels share similar objectives and are thus natural partners in peacekeeping.”

The UN and the EU began cooperating on peacekeeping matters over a decade ago when they signed the 2003 Joint Declaration on UN-EU Cooperation in Crisis Management. Since then, EU and UN efforts have complemented each other, but according to the panelists, there are still important gaps to be filled.

“Our goal is to improve cooperation on the ground between peace operations deployed by the EU and the UN by drawing concrete lessons from selected mission settings,” said Heiko Thoms, Deputy Permanent Representative of Germany to the UN. The joint deployment of EU and UN operations, both parallel and sequential, has become the norm, Mr. Thoms said, but this also means that a more synergic approach between the two is essential. “That is what we want to get at.”

The EU began working on a more cohesive foreign policy in 1992 with the Maastricht Treaty, but it was not until the 2007 Treaty of Lisbon that many of the EU’s competencies in foreign affairs were transferred to the newly-established European External Action Service (EEAS)—the EU’s foreign ministry—including the EU’s peacekeeping agenda.

The Maastricht Treaty had introduced the European common currency, the euro, and replaced what was then the European Community with today’s European Union. The 2007 Lisbon Treaty amended the Maastricht Treaty, refined some of the EU’s practices, and provided the Union with more coordinating competencies in the security and defense sectors.

One of the first new achievements was the adoption in 2011 of the “Plan of Action to Enhance EU CSDP [Common Security and Defense Policy] Support to UN Peacekeeping.” The panelists heralded this document as a major development for several reasons, one being that it enabled EU bodies such as the EEAS to play a bigger role in coordinating peacekeeping efforts.

“Since the Treaty of Lisbon, it’s the institutional actors who have led the coordination of these efforts,” said Thomas Mayr-Harting, the EU’s Permanent Representative to the UN. He referred to the EEAS itself but also to the EU’s Political and Security Committee—a special Council committee that monitors international crisis situations covered by the EU’s foreign policy agenda—as examples of the EU’s renewed focus on global crisis management.

And while the EU’s new focus on global security issues such as peacekeeping were a product of the Union’s own institutional evolution, the panelists noted that international developments played an important role as well.

Hervé Ladsous, the UN’s Under-Secretary-General for Peacekeeping Operations, said the winding down of the war in Afghanistan led the EU security community to a rethinking of its global role.

“As we were nearing the exit phase of ISAF [International Security Assistance Force] in Afghanistan, the time had come for member states of the European Union to consider coming back to United Nations peacekeeping,” he said. “And this is something we are gradually seeing.”

EU and UN forces are currently cooperating in more than one setting, Mr. Ladsous noted, including Mali, the Central African Republic, and the Democratic Republic of the Congo. More cooperation also means better coordination, he said, particularly when it comes to the planning phase and early crisis response.

In that regard, Mr. Ladsous pointed to the EU’s battlegroups as one way to approach early response. Established in 2004—and operational since 2007—battlegroups were designed as a way for the EU to deploy battalions of around 1,500 troops rapidly but for a limited time, up until the arrival of UN peacekeepers.

“The concept of battlegroups is a major concept,” Mr. Ladsous said. “My dream is that in certain circumstances the EU can come in with battlegroups and establish a bridgehead in a country that would give us a few months in order to deploy.”

Finding ways to devise a better rapid response will be at the core of this project. The joint endeavor will also involve the participation of IPI, the Paris-based EU Institute for Security Studies (EUISS), the Scuola Superiore Sant’Anna in Pisa, and the Berlin-based Center for International Peace Operations (ZIF), whose Senior Researcher Tobias Pietz moderated the discussion at the IPI forum.

Adam Smith, IPI Senior Fellow and Head of IPI’s Center for Peace Operations, said there has been a lot of interest as well as questions coming from European governments on this issue. “Our hope is that we can creatively explore all ways for the EU and the UN to work together more effectively, as well as for individual European states to help fill these critical capability gaps in UN peacekeeping operations,” he said in welcoming remarks.

The government of Italy will host the next meeting in Rome in October, followed by a second one organized by the German government in Berlin in November. The project will conclude with a final conference in December, which will take place in Brussels.