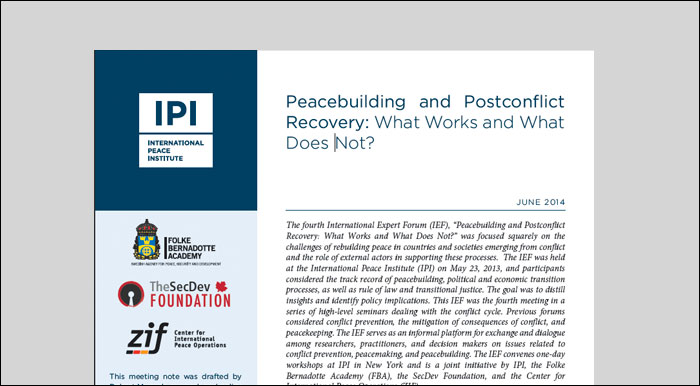 More than 600 peace agreements have been concluded since 1990, and nearly 120,000 peacekeepers were deployed in the late 1990s and early 2000s. Interventions based on Chapters VI and VII of the UN Charter have correlated with reductions in violence and conflict, yet our knowledge is still very limited about why, how, and which instruments and tools available to peacebuilders
work on the ground. The major challenge for peacebuilding is to find out what works and what does not.

This meeting note addresses this challenge of rebuilding peace in countries and societies emerging from conflict and the role external actors play in supporting these processes. It draws on the fourth International Expert Forum held at IPI on May 23, 2013, in collaboration with the Folke Bernadotte Academy, the SecDev Foundation, and the Center for International Peace Operations. Researchers, practitioners, and decision makers at the forum reflected on UN activities over the past two decades and initiatives undertaken independently by governments alongside multilateral, bilateral, and nongovernmental entities. A key question posed by the organizers was whether peacebuilding writ large has contributed empirically to improving safety, security, justice, democratization, and economic recovery and development.

After exploring the track record of peacebuilding to date and the difficulties of defining successful peacebuilding and its end point, the note examines postconflict political and economic transition processes, as well as the rule of law and transitional justice. It offers a number of recommendations for policymakers and researchers:

• Clarify what is included in the “universe” of peacebuilding.
• Review internal and external types of peacebuilding, being mindful of foreign versus locally driven peacebuilding processes.
• Recognize varied temporal and spatial scales of impacts and the short-, medium-, and long-term goals of peacebuilding, adjusting expectations accordingly.
• Ensure that metrics are focused on objective and subjective markers of peacebuilding, capturing perceptions, attitudes, and levels of confidence.
• Learn from the general lessons and insights emerging from practice and academia, including the role of inclusive and responsive processes at the national and subnational level; the central role of politics, institutions, and resilience; and the importance of homegrown and locally owned peacebuilding.