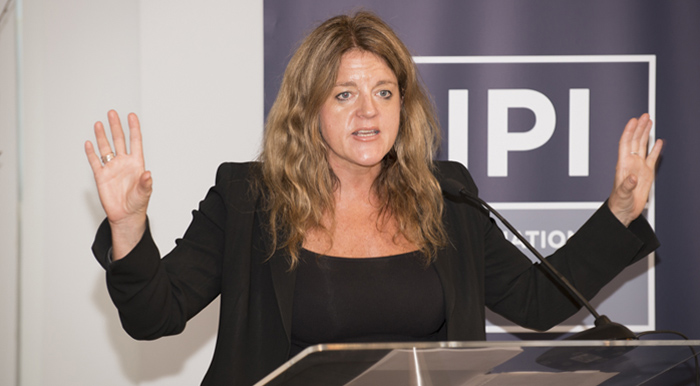 Hilde Johnson, the outgoing Head of the UN Mission in the Republic of South Sudan (UNMISS), gave an overflow IPI audience a dramatic account of the challenging situation that has faced the United Nations in the country since the eruption of mass violence at the end of last year.

Speaking at the latest IPI Special Representatives of the Secretary-General (SRSG) series event on July 1st entitled “The Protection of Civilians in South Sudan,” Ms. Johnson spoke of the devastating effects of a civil war that has displaced over one million people and killed more than 10,000 since December.

“The earliest days of the crisis, UNMISS had to quickly change its posture, mindset, and approach,” Ms. Johnson said as she recounted the sudden and unanticipated outbreak of violence in December, and the immediate response the UN mission had to devise.

UNMISS was established in 2011 after South Sudan gained independence from Sudan in July of that year. Its primary purpose was to aid the newly-formed government in its efforts at conflict prevention, mitigation, and resolution. But, Ms. Johnson said, the events of last December altered UNMISS’ mission in a rapid and substantial manner.

“Essentially, we shifted dramatically from prevention to direct response,” she said.

The morning following the outbreak of violence, UNMISS opened the gates of its bases to civilians fleeing the violence in the capital city of Juba, she recalled. As of today, Ms. Johnson said, over 100,000 civilians have taken refuge inside nine UNMISS bases. “This,” she declared, “is unprecedented in the history of peacekeeping.”

Violence erupted on the night of December 15th when government troops clashed with rebel forces, who had seized control of several towns across the country. The fighting between government forces headed by President Salva Kiir and rebel militias under the leadership of Vice-President Riek Machar led to the massive displacement of civilians and the evacuation of foreigners.

The two sides eventually signed a cease-fire in January 2014, but the agreement was broken several times, and now ex-vice-president Machar is on the run after President Kiir charged him with treason for causing the violence that has engulfed the world’s newest country.

Ms. Johnson, who had been deeply involved in the negotiations behind the Comprehensive Peace Agreement of 2005 that ended 22 years of war in the country, said that as soon as the crisis broke out, she tried to engage both sides to avoid a confrontation. But as the government failed to protect the South Sudanese people, UNMISS had no other option but to engage in full-scale civilian protection.

“When governments are unable or unwilling to provide such protection, peacekeeping operations must help assure that civilians are protected, as UNMISS has clearly demonstrated,” she said.

At the same time, Ms. Johnson acknowledged that UNMISS’ response was limited, and killings still took place indiscriminately. She said that the mission only had two companies in Juba, where each was tasked with the protection of mission staff and, later, of the swelling civilian population.

“It was never foreseen that fighting at this scale would break out in Juba,” she said.

Ms. Johnson said that Security Council Resolution 2155—adopted in May—was a positive step in expanding the protection of civilians’ mandate of the mission. But current troop levels are still much lower than what would be needed to assist the over 1.5 million displaced civilians (IDPs), she said.

“We would have needed hundreds of thousands of peacekeepers to really protect the South Sudanese people” she said.

However, Ms. Johnson noted that the majority of IDPs are not requesting force protection, but instead, more humanitarian assistance. In that regard, she said that UNMISS has been able to forge an important partnership with members of the humanitarian community who decided to remain in the country, despite the spike in violence.

Since December, the work of UNMISS has essentially been limited to assisting those thousands of people who were able to access UN bases. Now, the real challenge is managing these bases, Ms. Johnson said.

Health and sanitary conditions are critical, and episodes of crime and violence—including sexual violence—have been on the rise, she said. “But not opening the gates would have implied that thousands more would have been killed,” she said.

Looking ahead, Ms. Johnson said that up until the outbreak of violence, the country was moving in the right direction. South Sudan’s agriculture production had seen a 25 percent increase from the previous five years, and the overall nation-building project, at the heart of UNMISS’ mission, was on the right track.

“But now the nation-building project has been set back by decades, and the country may face the worst famine in its history,” she said.

This humanitarian and security crisis can be solved only when people will feel safe enough to return to their communities, Ms. Johnson said.

“This is, of course, about achieving a comprehensive peace agreement [with] public messaging from the government, but also about increasing safety and security in neighborhoods and communities,” she said.