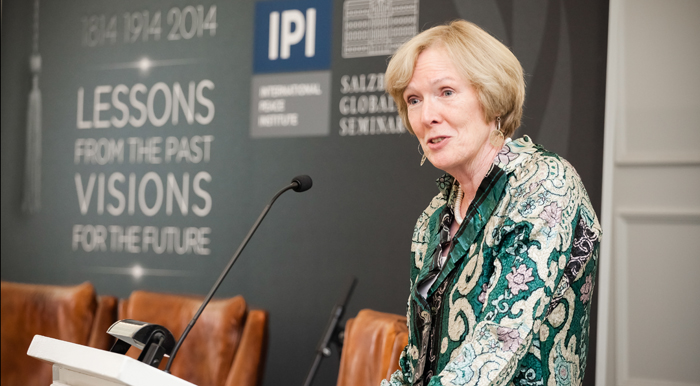 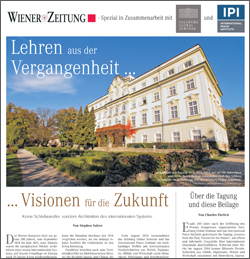 Read the Special Edition on the seminar in the Wiener Zeitung, March 13, 2015 (in German)

Between August 25th-29th, the International Peace Institute in cooperation with the Salzburg Global Seminar organized a high-level forum in Schloss Leopoldskron in Salzburg on “1814, 1914 and 2014: Lessons from the Past, Visions for the Future.”

While the meeting was designed to look at the international system through the prism of history reflecting on the Congress of Vienna and the outbreak of the First World War, many participants observed that 2014 is becoming a historically significant year.

A high-level group of ministers, former heads of state, historians, political analysts, and journalists engaged in a series of debates on current threats and challenges to the international system, and reflected on what lessons can be learned from history in order to prevent conflict and reduce risks. Many participants observed that “this is exactly the kind of conversation that we need at this critical juncture in history.”

It was observed that the international system is under stress. Geopolitical crises (particularly in Ukraine, the South China Sea and in the Middle East) threaten stability. Poverty and resource scarcity aggravate problems of governance and development. Unprecedented demographic shifts and environmental degradation are changing the face of the globe, while technological advancements and the international economy create new risks and opportunities.

Reflecting on the leadership and decisions of 1814 and 1914, as well as the interconnected challenges of the present, participants discussed whether the leaders of today are architects or sleepwalkers.

Participants noted with concern that crises continue to take leaders by surprise. The rapid rise of the Islamic State was given as a worrying example. The possibilities and limitations of regional organizations were highlighted, for example the role of the Organization for Security and Cooperation in Europe (OSCE) in dealing with the crisis between Russia and Ukraine. In relation to the crisis in the Middle East, the suggestion was made to convene an inclusive regional conference on the model of the Congress of Vienna.

While conflict and armed violence seem to be on the rise, participants noted that many future threats to international peace and security will not come from inter-state conflict rather from a wide range of threats and challenges related to the economy, the environment, demographics, technology, geopolitics and governance. It was therefore stressed that states must adapt their short-sighted policies to prevent long-term and system-wide vulnerabilities that affect the planet.

A number of participants commented that the post-World War Two Bretton Woods system is cracking under the pressure of complex and inter-connected challenges. To rectify this problem, the President of IPI, Terje Rød-Larsen, announced the launch of an Independent Commission on Multilateralism. The Commission, which will start work this autumn, will carry out a series of consultations to examine the strengths and weaknesses of the current international system – particularly the United Nations – and will present its recommendations in 2016.

Live music from 1814 and 1914 was played during social gatherings in the rococo palace, and graphic designer Ray Bartkus presented creative sketches of his reflections on the themes of the conference.

The event in Salzburg is part of a series of meetings that IPI is holding this year on lessons learned from 1814 and 1914. The event was preceded by a discussion of “Europe’s Future” in London in February. The next event will take place in Manama, Bahrain on September 10th-11th on the impact of the First World War on the Middle East, particularly the ripple effects of the Sykes-Picot agreement on contemporary geopolitics.

For the Salzburg event, IPI created a special documentary on the lessons of 1814 and 1914, entitled “Architects and Sleepwalkers.” A live Twitter feed at #IPISGS14 achieved over 2.3 million impacts with an average of 13,140 followers per contributor. A Storify wrap-up of the event on social media is available here.