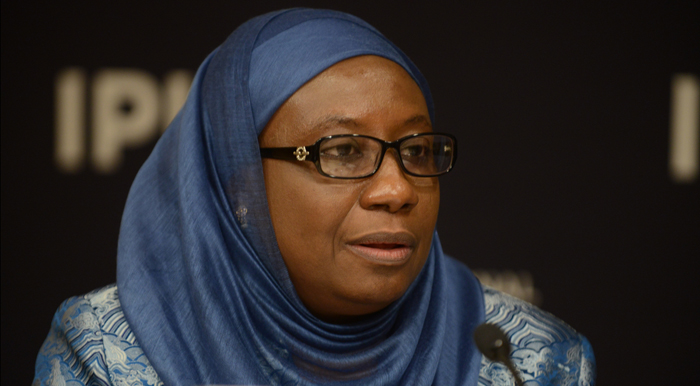 On September 17th, the African Union’s (AU) Commissioner for Political Affairs Aisha L. Abdullahi acknowledged that Africa had come a long way in its quest for democratic governance, but added that it would have to address the structural causes that often plunge it into conflict in order to “be at peace with itself, secure, and corruption-free.”

Speaking at an IPI African Leaders Series event entitled “Strengthening Democratic Governance in Africa,” Ms. Abdullahi delineated the African Union’s most recent achievements in terms of advancing democratic principles and called for a closer look at the makeup of the continent’s advance.

“We have made tremendous progress,” she said. “We have seen an Africa whose narrative has moved from its characterization as the ‘hopeless continent’ to ‘the rising Africa.’ But we must be careful celebrating the Africa-rising story, because the phenomenal economic growth rates on the continent are also accompanied by deepening poverty, unemployment, and inequality.”

Ms. Abdullahi said the positive story should not detract attention from the root causes of poor governance, which she identified as deep, structural weaknesses that give rise to violent conflicts, often pushing the democratization process back by years.

“We need to further strengthen our work in addressing root causes of crisis on the continent,” she said, “rather than responding to conflict incidents when they finally break out.” Prevention, she emphasized, is the best way forward if the continent is to truly embark on the path to peace and prosperity.

Among the causes she enumerated were: weak state institutions; low levels of government legitimacy; the militarization of society; politicization of ethnic identity; mismanagement of natural resources; environmental degradation; and socio-economic inequality. They all pose an existential threat to democracy, she said.

The ongoing conflicts in the Central African Republic, Lesotho, Somalia, Mali, and the Democratic Republic of the Congo all reflect these structural flaws, Ms. Abdullahi said, and they represent an important starting point in our understanding of the relevance of conflict prevention on the continent.

In that regard, she mentioned a recent AU initiative—the Africa Governance Architecture (AGA)—that seeks to implement human rights and democracy values across the continent by actively engaging with African civil society. One of the AGA’s goals, she noted, is to strengthen the link between civil society and African political institutions.

According to Ms. Abdullahi, the disconnect between civil society and the AU is one of the most pressing challenges of today. Indeed, a member of the audience noted how the language of comprehensive initiatives such as the AGA does not carry over to the lives of ordinary African citizens, who, because of lack of knowledge and education, remain marginalized.

“It’s true,” Ms. Abdullahi admitted. “When we had the Organization of African Unity, most of its activities focused on governments and states, and the participation of African citizens was very low.”

But now, she argued, the AU is trying to change that trend.

“The AU has in its vision that it has to be people-driven. So whatever activity we do now in the African Union, civil society is directly involved,” she said.

John Hirsch, senior adviser at IPI and the moderator of the event, noted during the question-and-answer session how the autocratic nature of many African leaders can be perceived as an additional obstacle to democratic governance. Often, he noted, although they subscribe to the AU’s noble aspirations, African leaders fall short of implementing them.

“Is there a major disconnect between these aspirations and the behavior of these leaders once they leave Addis Ababa and go back to their capitals?” he asked, referring to the city where the AU Secretariat is headquartered.

Yes, Ms. Abdullahi said, there are autocratic regimes on the continent, but their continuing presence simply serves as evidence of the structural causes of conflict outlined above and the need to address them, she said.

“[These causes] propel violent conflicts and instability in Africa with devastating impact on peace, democracy, and development,” she said. “An effective response…has to go deeper in addressing [them].”