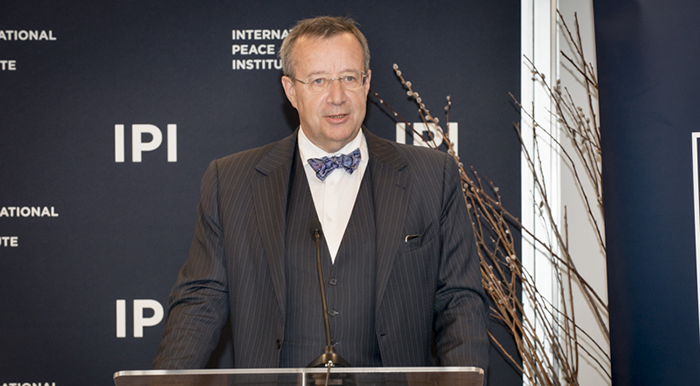 On September 25th, President Toomas Hendrik Ilves of Estonia warned that Russia’s recent aggression in Ukraine is a threat to the norms of the international system as we know them, and that it may lead to a drastic reassessment of foreign policy priorities in Europe.

Speaking at IPI on “The New Security Reality in Europe,” Mr. Ilves, whose country shares a border with Russia, said that Russia’s annexation of Crimea and its invasion of eastern Ukraine have put into question the rule-based behavior that has underpinned the international system since the end of the Cold War and as far back as the drafting of the UN Charter in 1945.

“The entire security environment in Europe has changed, and these are unprecedented developments which we haven’t seen since World War II,” Mr. Ilves said. “Today, we no longer have rule-based behavior [in the international system].”

The Estonian president referred to recent events in Ukraine where, after a popular revolt ousted pro-Russia President Viktor Yanukovych in February, the Russian government has taken multiple steps to destabilize the country. Since Mr. Yanukovych’s ousting, Russia has annexed the region of Crimea, supported separatist rebels in eastern Ukraine, sent troops across the border, and allegedly contributed to the downing of Malaysian civilian airliner MH17 over Ukrainian sky, killing all 298 people on board.

Mr. Ilves said that these events have seriously challenged the existing international order and the achievements made in terms of defining acceptable standards of behavior.

The UN Charter, he said, urges states to refrain from the use of force; the 1975 Helsinki Final Act commits all transatlantic countries not to use force to change international borders; and according to the 1990 Paris Charter, all states, from Vancouver to Vladivostok, retain the freedom to decide their own security arrangements.

“But the annexation of Crimea and the invasion of eastern Ukraine demonstrate the collapse of the values enshrined in these documents,” he lamented.

Mr. Ilves also noted how these documents have been breached by a country, Russia, which as the Soviet Union, had been a signatory to them. “So today, here we are,” he said. “None of the rules apply.”

The problem, Mr. Ilves said, is that the current standoff in Ukraine is not simply a conflict between Russia and Ukraine. Nor is it confined to the European continent. Instead, the type of behavior we have seen Ukraine, he said, is a threat to the entire global system.

“If instead of agreements, laws, and conventions, raw brutal force applies in international relations—if changing state borders by force become[s] an accepted norm, then the stability of the whole world is threatened,” he warned.

The implications of such a system, he said, are hard to predict. But one thing is sure, he added: A world in which states are continuously threatened by such behavior is one where states will be forced to reassess their spending priorities, allocating more money on security and defense but at the expense of other programs like peacekeeping and foreign aid.

“Because, ultimately, what does a country do when its own security is threatened? You go back to your basic…need,” he said. “Your security is far more important than proceeding on giving aid.”

Such a scenario, he acknowledged, would be less than ideal. Higher defense spending, in addition to limiting the funds available for humanitarian and development aid, is also likely to reduce funding for international peacekeeping missions.

A country like Estonia, he said, which has been an important presence in peacekeeping missions over recent years and is now faced with a tense security situation on its borders, would be forced to reconsider its commitments. “I don’t see countries like mine being very active in peacekeeping missions far, far away when in fact the security situation in our immediate area has dramatically changed.”

But we are not at that stage yet, Mr. Ilves said. In addition to reaffirming his country’s commitment to peacekeeping operations and its role within NATO, he also said that a gloomy, Hobbesian Europe can be avoided. Europe and the rest of the international community need to react when violations of international norms take place.

“The international community cannot leave Crimea in the situation it is in now,” he said. “We cannot accept the creation of foreign conflicts as a tool of geopolitical ends.” The 2008 Georgia war was a similar situation, he said, and Europe is behaving similarly today.

“Europe didn’t act, in the hope that it would go away,” he said. “But it didn’t go away. Six years after, we see what we have seen in the past…months [in Ukraine].”