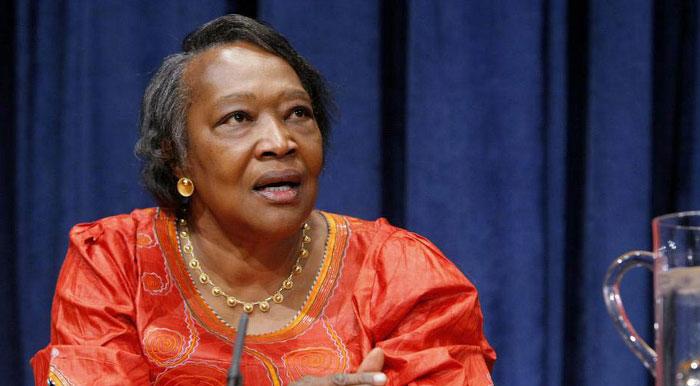 Margaret was first and foremost a scholar and researcher at the Nigerian Institute of International Affairs. She subsequently became an important voice (leader) at the African Union and the United Nations in the decades long promotion of conflict resolution and the advancement of women’s rights in Africa. She passed away on September 23, 2014.

In 1995, under the leadership of IPI (known then as IPA) President Olara Otunnu, Margaret established IPI’s Africa Program (our longest running program). At the time of the civil wars in Liberia and Somalia, and the genocide in Rwanda, Margaret recognized the need for the Organization of African Unity (OAU) and the regional economic communities (RECs) to be directly involved in the prevention and resolution of conflicts. At the OAU summit in Cairo in 1995, she proposed a conflict prevention and management protocol. African heads of state agreed, leading to the establishment of the Conflict Management Center at OAU Headquarters in Addis Ababa in 1996. At the ECOWAS summit in Banjul in 1998, Margaret again spearheaded establishment of the regional Conflict Management Center now located in Abuja.

In 2000, Margaret became Chef de Cabinet of the African Union’s first Chairperson Alpha Oumar Konare, directing the African Union’s efforts to address conflicts in Somalia, Sudan, Liberia, Sierra Leone, and elsewhere. She contributed significantly to the planning for the African Union (AU), the successor to the OAU, and the drafting of its Constitutive Act involving greater engagement in conflict resolution, and authorizing interventions in cases of war crimes, genocide, and crimes against humanity. It was a large step forward. Margaret subsequently worked to develop and strengthen the operational relationship between the African Union and the United Nations (UN) in conflict management.

Margaret was a strong and early voice for the involvement of civil society and women in the search for peace and the participation of women in continental and regional mediation efforts. In May-June 1996, she organized an IPI Conference on Civil Society and Conflict Management in Africa in Capetown (which I attended while still Ambassador to Sierra Leone) promoting the participation of civil society and women in peacekeeping. She was one of the earliest advocates of women’s active participation in mediation and sought to establish ongoing linkages among women leaders in African countries long before the internet and social media made this feasible.

During her time with the UN Department of Political Affairs, she had an open-door policy and was always available to listen and advise her colleagues. In addition to ensuring that the teams under her supervision were producing high-quality work, she always took the time to mentor, guide, and empower young professionals in DPA. Based on her in-depth experience in academia and the field, Margaret had the ability to train young professionals in preparing crisp and insightful political assessments of conflict and post-conflict situations and suggesting action-oriented recommendations for the leadership of DPA.

Margaret will be remembered for her tireless advocacy of the search for peace in Africa, taking on even the toughest role as Special Representative to the Secretary-General in the Central African Republic at a time of major crisis and civil war. At the Center for Conflict Resolution in Capetown and at IPI she worked actively for many years to assure that African voices are heard in the academic and policy communities. She made a lifelong commitment to advancing women’s participation in the search for peace on the continent.

Her many friends at IPI, the UN, and the AU will cherish her memory. We extend our profound condolences to her husband and family.

John Hirsch is IPI Senior Advisor to the Africa Program and was US Ambassador to Sierra Leone from 1995-1998.

Lamii Kromah, IPI Research Fellow who worked with Ms. Vogt at the UN Department of Political Affairs, also contributed to this report.