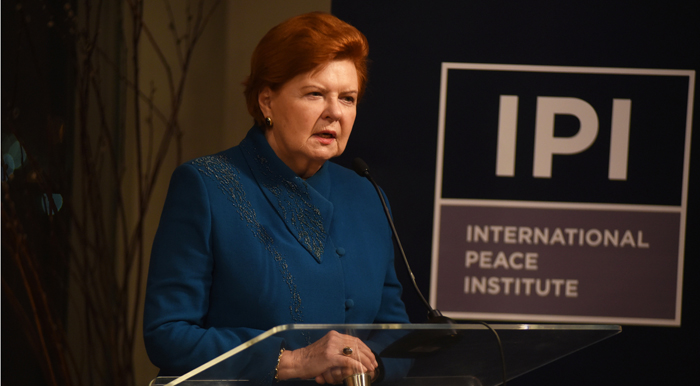 In a speech delivered at IPI on September 30th, Dr. Vaira Vike-Freiberga gave a sobering historical analysis of the gains and setbacks made by the international system over the past century and, focusing on the UN, she called for a rethinking of the organization’s structure and approach to peace.

Speaking on “The Theory and Practice of International Order,” Dr. Vike-Freiberga, formerly the president of Latvia and now the president of the Club of Madrid, assessed the system the UN inherited from the League of Nations and World War Two, and praised its strengths while also highlighting its weaknesses.

“[The UN] is an august institution which of course embodies all the ideals and the hopes of humanity in terms of having a humane, rational, and understandable world order,” she said. Its system—made up of institutions, charters, and treaties—is one which states should theoretically abide by, she said.

The UN system has made several important achievements over the past 70 years, she said. The fact that the UN now has a peacekeeping force, the introduction of a Responsibility to Protect principle, the creation of subsidiary bodies that focus on specific issue areas such as human rights, development, women’s rights, are all steps that ought to be acknowledged and praised, she said.

“These are… proof of the fact that a great deal of good can be accomplished on the international scene [if we] follow to the letter the principles which have been accepted by all.”

But even while the UN can boast such accomplishments, she said, there is something about the structure itself of the organization that often pulls it back. The Security Council, she pointed out, is at times an obstacle to the UN’s objective of promoting peace and security around the world.

“The structure of the UN is a fatal flaw,” she declared. “The fact that the winners of the war plus China… were given special privileges in taking the most serious and important decisions is… to my mind a built-in flaw and deficiency in the system,” she said, referring to the permanent status as well as the veto power of the so-called P-5—China, France, Russia, the UK, and the US.

In that regard, Dr. Vike-Freiberga, who served as Latvia’s president from 1999 to 2007, criticized Russia for its aggressive actions in Ukraine. If states continue to blatantly disregard these institutions, she lamented, achieving international stability will be particularly difficult.

“Here you have a member of the P-5, a nation at the highest levels of decision-making of the international world order…breaching every single principle the UN has subscribed to,” she noted.

When nations breach agreements they had previously subscribed to, simply in order to secure their interests, the UN and the entire international system are thrown into instability and uncertainty, she indicated.

According to Dr. Vike-Freiberga, the Council’s veto system is unlikely to go away anytime soon, despite numerous calls for Security Council reform. “The problem,” she said, “is that privileges of that sort are not given up lightly.”

The task, then, becomes one of making the best out of the existing system, she said. This can be done by encouraging a return to the normative foundations that led to the UN’s founding in the first place, she added, and by promoting the understanding of the causes of conflict as well as the recipes for peace.

In making her point, Dr. Vike-Freiberga drew on insights from human biology and psychology in an effort to better depict—and understand—how human nature affects international relations. Among the traits humans share with primates, she argued, aggressiveness is one of those that are most visible in inter- and intra-state relations, as past and current conflicts demonstrate.

“The human race is unable to find the recipe for living in peace—there will be conflict and blood will flow,” she said. “That to my mind is something we have to address by understanding better what human nature is all about.”

Ultimately, she said, a way to overcome this “animal inheritance” exists and is one which already undergirds the system we have. “We become civilized human beings and members of society—this is what both civilization and governance are all about—by creating [institutions like] international law, international agreements, and international treaties.”