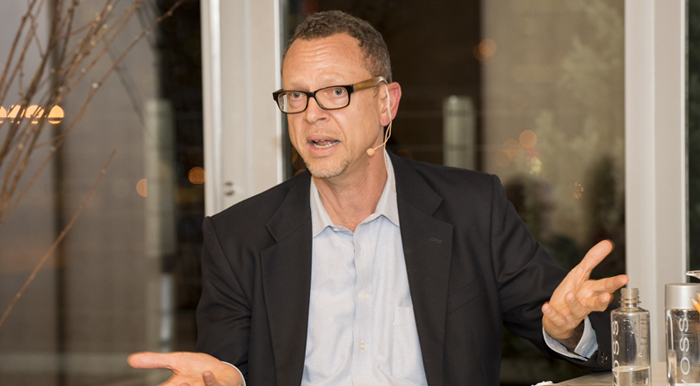 Speaking at an IPI Distinguished Author Series event on October 9th, author Howard French made a case for how Western underestimation of Africa’s economic promise has enabled China to establish an economic and human presence on the continent, leading to the permanent migration there of nearly 2 million Chinese.

The author of a new book entitled China’s Second Continent: How a Million Migrants are Building a new Empire in Africa, Mr. French said the West’s perception of Africa as a place of war and disease was distorted and misguided. China, he said, did not make that mistake.

Mr. French argued that with the end of the Cold War, Europe and the West “abandoned” Africa and focused instead on Eastern Europe and the Middle East by projecting the bulk of their energies to opportunities in those regions.

“What the Americans and the Europeans did not do, was to think of Africa as a place with a future, think about Africa as an economic place,” he said, something the Chinese were quick to notice. “In surveying the world, they [noticed] this incredibly large space called Africa that nobody in the West [was] paying attention to, which [had] been completely abandoned.”

China’s economic quest in Africa was gradual, Mr. French said, and began with the realization of the continent’s ability to offer a relatively competition-free market where new Chinese economic ventures didn’t have to compete with more established Western ones. That is why today you can buy a cellphone for $15 in Africa, he said, manufactured by companies that in Europe and North America are known for making refrigerators and other kitchen appliances.

“Now,” he said, “Chinese companies are branding their own names in Africa.”

In the book, Mr. French provides a historical overview of this phenomenon and explains how increased Chinese investment on the continent has brought with it large numbers of Chinese workers. Many of them, he said, decided to stay in Africa long after their work assignments ended.

“They are there for two years, and at the end of their contract they realize that life there isn’t that bad,” he said. They also found greater opportunities in Africa than in their own country.

Of course, the large influx of Chinese migrants has come with its drawbacks, Mr. French acknowledged. While this massive workforce has enabled Chinese investors to deliver their projects on time, the workers’ technical skills often don’t transfer to local Africans, thus raising the question of how sustainable this trend can be over the long run.

Mr. French described business deals as working more or less this way: A Chinese company gets in touch with a specific African country and makes an offer for a deal—usually the building of a road, a highway, a stadium, or some other form of public infrastructure. The company promises on-time, and sometimes even early, delivery. The African government then agrees to a payment method, usually in mineral and natural resources, which is rendered over a 20-year timespan. Chinese workers fly to the project, complete it, and some of them end up staying.

But Mr. French said the problem is that with no technical transfer, and little Chinese integration in local life, Africans are often unable to maintain the projects once they have been delivered. “A Chinese engineer once told me that the average life of a highway system in sub-Saharan Africa is 7-8 years,” he said. When you put that next to the 20-year payment plan, you can see that Africans will often come up short, he added.

“And this is how African civil society realized there is something wrong,” he said. “With no human resources’ skill transfer, no training, no technology turnover, and no engineers participating in the project[s], Africans began to question this model.”

African citizens are now asking their governments to impose more restrictions on Chinese companies that wish to invest on the continent, he said, such as training and maintenance requirements. The move has the potential to work, but it is difficult, given the little interest there currently is in investing on the continent, he added.

“The sad reality is that there aren’t a lot of options for the Africans,” he said. “The West is generally not competing for these businesses.”

And although this means that other, non-Western countries such as India, Turkey, and Brazil are likely to enter the picture, the Chinese still retain a high degree of leverage, he said.