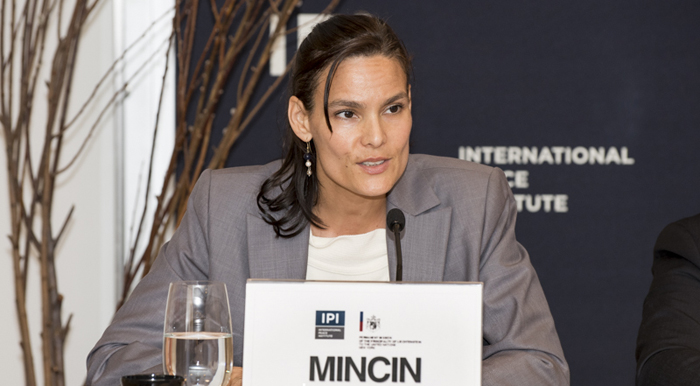 The drastic increase in conflicts around the globe has seen the world’s displaced population pass 55 million people, and the fact that 80% of them are women and children is prompting many to rethink how the international community is responding.

To address this issue, a group of UN officials and NGO representatives gathered at IPI on October 9th for a policy forum on “Women and Forced Migration: Challenges and Responses to Unprecedented Displacement.” Organized jointly by IPI and the Permanent Mission of Liechtenstein to the UN, the event was held in preparation for the upcoming October 28th Security Council Open Debate on the women, peace, and security agenda.

“The issue has been approached as purely a humanitarian [one]…but not enough focus has been on displacement as a peace and security issue,” said Nahla Valji, policy adviser and officer in charge in the Peace and Security Section at UN Women. “And very little attention,” she added, “has been on this issue through a women, peace, and security lens.”

The upcoming Security Council open debate is expected to pay particular attention to this perspective, and Ms. Valji said that Resolution 2122 on women, peace, and security is an example of how this lens can help address some of the existing gaps.

“[The resolution] notes in particular the issues of unequal citizenship rights and laws in countries of origin [as well as how] women experience the full range of human rights violations during conflict,” she said. “They experience them differently as a result of pre-existing gender inequalities.”

Current conflicts in Syria, South Sudan, and the Central African Republic were some of the examples cited by the panelists where poor gender protections have led to particularly difficult situations for women and young girls.

Jenny Mincin, the deputy director of the Women’s Protection and Empowerment Unit at the International Rescue Committee (IRC), noted how Syrian women and girls still face serious challenges as a result of the three-year conflict there. In discussing some of the findings of a recent report by the IRC, Ms. Mincin said that domestic violence was a particular menace for millions of Syrian women who have fled into neighboring countries.

“More than 70% of violent incidents reported to IRC staff happened in refugee homes,” she said. “Of those incidents, 80% were perpetrated by an intimate partner or by someone known to the victim.”

According to figures cited by one of the panelists, internally displaced people, or IDPs, amount to over 33 million people around the world and one of their defining traits is that most of them don’t know how long their displacement will ultimately last. In the vast majority of cases, these people have been displaced by ongoing conflict and civil war.

“The trend is that the core of them will never return, or only after a very long time,” said Hansjoerg Strohmeyer, chief of Policy Development and Studies at the UN Office for the Coordination of Humanitarian Affairs (OCHA). “The average duration of displacement in conflict settings is 17.5 years,” he said.

The panelists noted how the length of displacement is at the core of the displacement issue, particularly as the international community looks for new tools, not only to ensure the return of women and children, but also to enable receiving countries or municipalities to respond effectively to the influx of vulnerable refugees.

For too long, Mr. Strohmeyer said, the global response has emphasized the humanitarian aspect of the crisis, ignoring other key ones, including the development perspective.

“Forced displacement is often taken as a humanitarian issue, an issue for OCHA, UNHCR [UN High Commissioner for Refugees], or the IOM [International Organization for Migration,” he said. “But it actually is a long-term development issue…and that’s where the biggest gap exists in terms of finances and ways forward.”

Looking at forced displacement through the lens of development, Mr. Strohmeyer said, would lead to solutions that, in the long run, could help both the hosts and the incoming refugees in the resettlement process. To that effect, he said including forced displacement in the post-2015 sustainable development goals (SDG) agenda could be useful, a point seconded by UNHCR Deputy Director Anne-Christine Eriksson.

“You will not have peaceful societies unless you deal with those 55 million displaced people,” he said. “And you will not be able to deal with them if you don’t invest differently in the long-term institutional capabilities and capacities of those countries affected.”

Even as some of the panelists highlighted the importance of a development approach in tackling the issue of prolonged displacement, others emphasized how the changing nature of today’s conflicts is urging a rethinking of how to protect girls, women, and children in crisis settings.

The challenge, the panelists said, is that a response in Syria—as in other crises situations—requires action by the Security Council, which has been slow to act.

“While the issue of IDPs is not new to the Security Council, very often its language is devoid of any concrete meaning,” Mr. Strohmeyer said. “You put it there because it’s a feature of the conflict, but it doesn’t lead to anything substantial. The language in these resolutions needs to change,” he said.