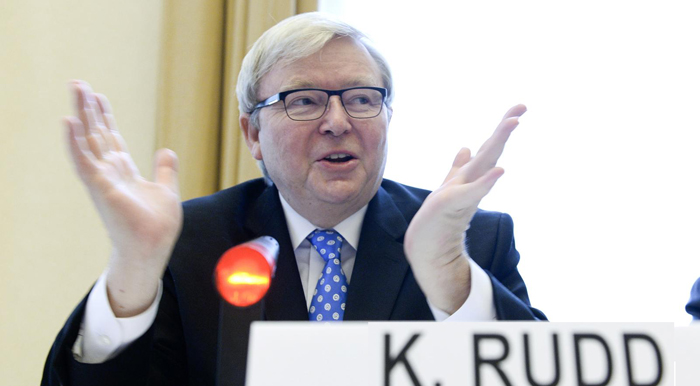 The Geneva launch of the Independent Commission on Multilateralism (ICM) took place on November 27th in the Palais de Nations, the UN headquarters in Geneva which used to be the seat of the League of Nations.

Following launches in New York and Vienna, the Geneva meeting enabled the Chair of the ICM, former Australian prime minister Kevin Rudd, to explain the objectives of the ICM to the diplomatic corps in Geneva and representatives of Geneva-based multilateral institutions. The meeting was hosted by Michael Møller, acting head of the United Nations Office in Geneva.

In his opening remarks, IPI President Terje Rød-Larsen highlighted how “Geneva is associated with so many of the world’s most noble institutions and instruments of international law—like the Geneva Conventions, the ICRC, UNHCR, and the UN High Commissioner for Human Rights.” At the same time, he recalled the rise and fall of the League of Nations. Therefore, “Geneva shows what happens when multilateralism works and offers us a warning of what happens when it fails.”

Following IPI’s Global Trends presentation on threats to international peace and security, Mr. Rudd said that the sheer number, complexity, and scope of contemporary challenges is causing some leaders to feel overwhelmed. This in turn is inducing a sense of “learned helplessness” in dealing with many of the problems of our time. He also cautioned that if the current multilateral system is not able to adapt, it will be circumvented, or even risks “dying a death of a thousand cuts.”

When asked about the difference between the ICM and past attempts to reform the international system, Mr. Rudd explained that the ICM will be independent, it will be constructive, and above all, consultative. It will explore options for change within the system rather than seek to change the system. Furthermore, he pointed out that “it has been a long time since there was an analysis of the aggregate effectiveness of the international system,” and a fresh perspective could be useful “since we are in a very different international space than we were even one year ago.”

Mr. Rudd explained that the ICM will carry out an extensive series of consultations among member states, intergovernmental organizations, as well as civil society and the private sector.

The commission has so far identified 15 thematic areas to address in its work. Each topic will be the focus of expert-level discussions, and a report will be issued on each, resulting in a series of issue papers and working papers that will seek external input, before culminating in a final report by the end of 2016.