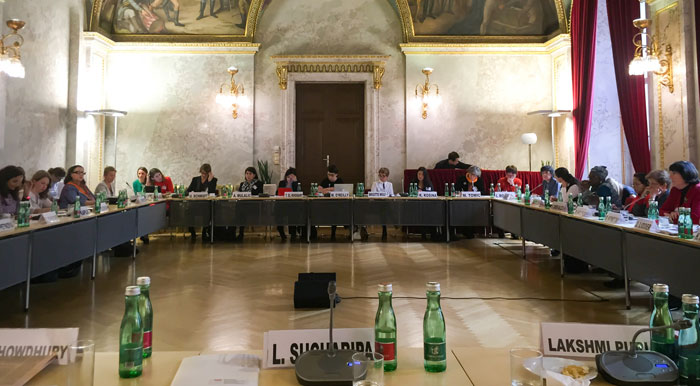 “We did not want to make war safe for women; we wanted to end war for everyone,” Ambassador Anwarul Chowdhury said, recalling the goal of a new resolution he introduced as president of the Security Council in the year 2000.

Speaking about Resolution 1325 on women, peace, and security 14 years later at the opening of the symposium “Enhancing Women’s Share in Peace and Security,” Mr. Chowdhury said that there has been a change in mindsets about women’s roles in peace and security in the last 14 years, but the UN Security Council still needs to shift its focus from ensuring the security of the state to maintaining “human security,” which includes women.

The symposium, co-organized by the International Peace Institute, the Bruno Kreisky Forum, and the Austrian Ministry for Foreign Affairs, took place in Vienna on November 3rd and 4th. Panelists examined good practices, gaps, and challenges in the implementation of the women, peace, and security agenda in light of emerging trends and priorities in the 21st century.

Given the changing landscape of conflict today, Deputy Executive Director of UN Women Lakshmi Puri emphasized the need to make the state-based women, peace, and security agenda applicable to non-state actors and the new challenges posed by violent extremism.

Participants also recommended re-thinking the international approach to peace processes and called for better documentation of the roles that women peacemakers already play. They acknowledged the important role of media and civil society initiatives in advancing women’s participation in decision-making around peace and security issues and suggested strengthening efforts to engage broader swathes of society on this important issue.