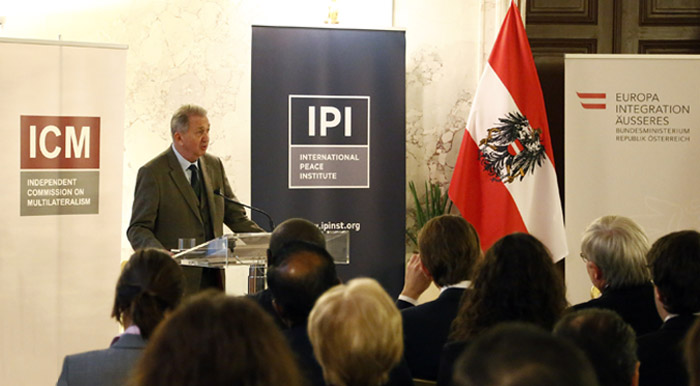 The Independent Commission on Multilateralism (ICM) was launched officially in Vienna on November 25th. The event was held at the Austrian Federal Ministry for Europe, Integration and Foreign Affairs and opened by Austrian Foreign Minister Sebastian Kurz.

It provided an opportunity for ICM Chairman Kevin Rudd to explain the objectives of the initiative to the diplomatic corps in Vienna and representatives of Vienna-based multilateral institutions.

Established with support from the governments of Canada and Norway, the ICM is a two-year process designed to analyze the changing nature of contemporary challenges, and make recommendations to strengthen the multilateral system.

“The world is facing a convergence of events and forces that is almost overwhelming,” said Mr. Rudd. In particular, he highlighted drivers of change (such as technology, demography, and communications), geopolitical shifts (primarily related to China and Russia), and the impact of non-state actors like global jihadism. “The problem for the global community is that all these things are happening at the same time causing strains and fractures in the current architecture,” he said.

Warning that “the international system is under stress,” Mr. Rudd outlined three possible courses of action: one, muddle through using the current system at the risk that it collapses; two, replace existing institutions with a completely new system, “which is probably too idealistic and too difficult to implement”; or three, strengthen the effectiveness of the existing system. “We favor the latter option,” said Mr. Rudd. “We are friends of the UN-centered system. The ICM will provide recommendations to make it as ‘fit for purpose’ as possible to meet the challenges of the 21st century.”

The chairman of the ICM noted that because of the complexity of the challenges faced by the international system, the Commission’s report (expected in 2016) may present options rather than definitive recommendations. “Furthermore, we need to provide guidance on how to make things happen rather than just pointing out what needs to be done,” said Mr. Rudd.

In his opening remarks, IPI President Terje Rød-Larsen said that “it is both appropriate and symbolic” that the ICM is launched in Austria’s capital, “since the multilateral system traces its roots back to 1814 and the Congress of Vienna.” He noted that “today, Vienna is a hub for multilateral security.” It is home to a number of international organizations including the Comprehensive Nuclear Test Ban Treaty Organization (CTBTO), the International Atomic Energy Agency (IAEA), the Organization of the Oil Producing Exporting Countries (OPEC), the Organization for Security and Co-operation in Europe (OSCE), the United Nations Industrial Development Organization (UNIDO), and the United Nations Office on Drugs and Crime (UNODC).

Both Mr. Rudd and Mr. Rød-Larsen stressed the ICM’s independence as one of the keys to its success. “It is easier to make recommendations for the reform of the system from outside, than from within,” said Mr. Rød-Larsen. At the same time, he said that the Commission would be inclusive: “It should reflect international society–in terms of geography, gender, and be representative of a wide range of views from governments, intergovernmental institutions, civil society, and the private sector,” he said.

For this reason, the ICM plans to consult widely with UN member states, multilateral institutions, as well as companies and civil society. “We will also be deeply mindful of the accumulated wisdom and institutional experience of states and institutions committed to enhancing multilateralism,” said Mr. Rudd. “There is no point in re-inventing the wheel.”