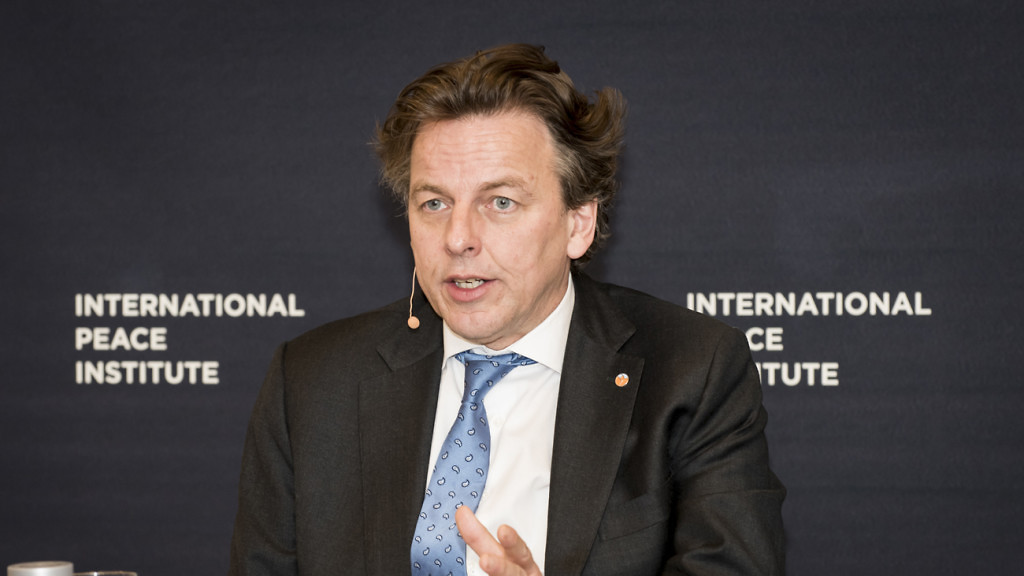 Speaking to an overflow IPI audience on January 20th, Dutch Foreign Minister Bert Koenders acknowledged how far the United Nations has come since its inception 70 years ago but said that the organization still “has a lot of growing up to do.”

During his remarks on “The UN at 70: Partnering for Peace, Justice, and Development,” Mr. Koenders—formerly the head of two UN peacekeeping missions, in Mali and Côte d’Ivoire—touched on a series of areas in which he said the UN could play a key role, ranging from peace operations and civilian protection to terrorism and women’s rights.

But in order for the UN to succeed in its task, Mr. Koenders argued, reform has to start from within, beginning with the Security Council. “The United Nations is the headquarters for all those who want a better world…, [but] if we want to get better at building peace, the Security Council has to change,” he said. “We need a more effective and legitimate Security Council that reflects today’s realities.”

Talk of Security Council reform has abounded in recent years, Mr. Koenders noted, and for obvious reasons different stakeholders have different preferences. But in practice, he said, reforming the UN’s main decision-making body should at least entail reassessing the use of the veto and making the Council more representative.

“I think it is completely silly that Africa or Latin America—enormous rising continents and powers—are not represented,” he lamented. “It’s simply unacceptable.” But he also warned that an over-crowded Council, now with 15 members, would be even less effective. Just over 20 members would be the ideal size, he argued.

With regard to the veto, the Dutch foreign minister praised the proposal by the French government first brought up by President François Hollande in late 2013. The proposal would see the permanent members of the Council agreeing not to use the veto in cases of mass atrocity, such as the ongoing conflict in Syria, where the Council’s inability to respond is particularly problematic.

“I think the world still has not realized sufficiently the enormous suffering that is taking place [there],” he said.

But paralysis affects not only the Security Council, Mr. Koenders said. On women’s rights, for instance, he said Resolution 1325 on women, peace, and security is a major step forward, even though its norms are still not being implemented. Citing numbers from a recent IPI study on the topic, Mr. Koenders said that only 9 percent of delegates in formal peace processes are women.

“1325 is not a piece of paper,” he said. “We need to convert [it] toward real action…. The United Nations must keep the promises it has made to the world’s women.”

Building on his personal experience heading two peacekeeping missions, Mr. Koenders said the UN can do more to make its peacekeeping arm more effective. “Are we still on the right track when it comes to the relationship between mandate and means, between mandate and implementation, between troop-contributing countries and what we really need on the ground?” he asked.

Mr. Koenders also discussed how other current global issues are affecting his own country and Europe as a whole. Reflecting on the recent deadly terrorist attacks in Paris where 17 people lost their lives, he called for a careful approach to the problem of terrorism.

“The United Nations has played a key legitimate and legal role in stopping the flow of financial resources to foreign fighters,” he said. “But we should also look at the origins, the complex origins of terrorism.” Radicalized elements need to be given an alternative narrative, Mr. Koenders said, one that is based on human rights, freedom of speech, and freedom of religion.

And referring to the July 2014 downing of Malaysia Airlines flight MH17 over eastern Ukraine which killed 196 Dutch citizens, Mr. Koenders said that the ultimate goal of the ongoing investigation is to attain accountability and identify who is responsible.

“That can take time, but we can hopefully ascertain without any doubt the responsibility and the legal process, ensuring that those who are responsible for this are in front of a judge,” he said.

The accident, Mr. Koenders said, has also shown that global crises have become directly intertwined with the lives of citizens living elsewhere.

“We—foreign ministers, diplomats—have to be those who make the bridge between the local and the international,” he said. “That’s our task.”