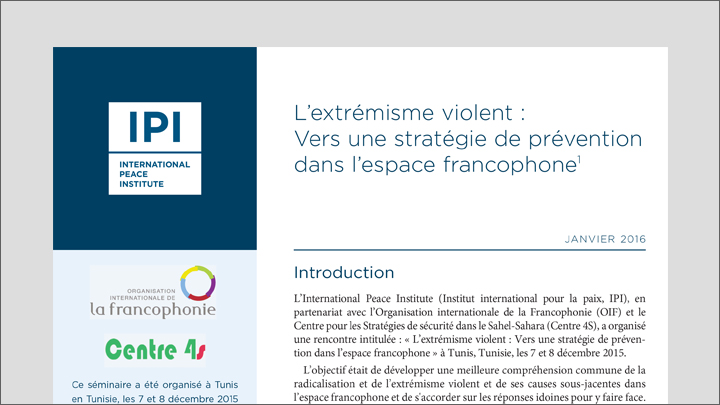 Violent extremism has become a dominant problem in the Sahel-Sahara region in the last couple of years. An increasing array of nonstate actors are threatening the state and the safety of populations while at the same time taking on a transnational character and increasing ties and affiliations with actors beyond the francophone space. Despite the urgency of this critical threat, current responses of states in the region seem to be uncoordinated and inadequate.

This meeting note, written in French with an English summary included as an annex, aims to contribute toward better mutual understanding of violent extremism in the Sahel-Sahara region and its underlying causes. It also outlines a number of potential regional, national, and community responses.

The report stems from a seminar IPI organized in Tunis, Tunisia, from December 7 to 8, 2015, in partnership with the International Organisation of La Francophonie (OIF) and the Centre for Strategies and Security for the Sahel Sahara (Centre 4S, Nouakchott, Mauritania).

The following are among the recommendations that emerged from the seminar’s discussions:

Read more about the seminar>>