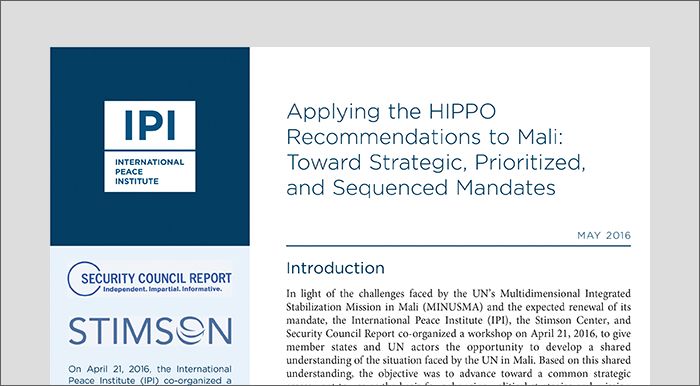 The past year has seen significant progress in Mali, with the signing of a peace agreement in June 2015 and the ensuing decrease in violence between the signatory parties. These achievements have allowed the UN to shift from prioritizing cease-fire monitoring to focusing its efforts on the implementation of the peace agreement. In the wake of this shift in context, the mandate of the UN’s Multidimensional Integrated Stabilization Mission in Mali (MINUSMA) is expected to be renewed in June 2016.

In light of the challenges faced by MINUSMA and the expected renewal of its mandate, the International Peace Institute (IPI), the Stimson Center, and Security Council Report co-organized a workshop on April 21, 2016, to give member states and UN actors the opportunity to develop a shared understanding of the situation faced by the UN in Mali. This workshop was the first in a series analyzing how UN policies and the June 2015 recommendations of the High-Level Independent Panel on Peace Operations (HIPPO) can be applied to country-specific contexts.

Participants agreed that MINUSMA must first and foremost continue to assist with the implementation of the peace agreement, while also ensuring that the population enjoys peace dividends. It was suggested that the mission’s political strategy focus on pursuing a more inclusive approach, building trust between the parties to the conflict, addressing spoilers and asymmetric threats, balancing between a political and a military approach, developing partnerships, enhancing capabilities, and identifying a completion strategy.

In addition, participants emphasized the importance of prioritization and sequencing to ensure that mandates are realistic and achievable. In the face of existing limitations, it was suggested that MINUSMA could achieve progress in linking the peace agreement’s security and political dimensions, supporting stabilization in the north, prioritizing DDR as part of a long-term strategy, clarifying the protection of civilians mandate, and coming to a joint understanding of what the return of state authority means.