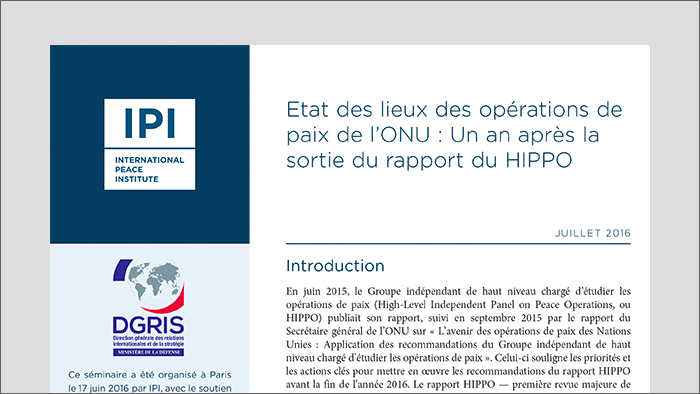 The 2015 report of the High-Level Independent Panel on Peace Operations (HIPPO) has been seen as an opportunity to make UN peace operations more fit for purpose in the face of new realities on the ground. However, the number and scope of the recommendations contained in the report, and the fact that the UN Secretariat and member states share responsibility for their implementation, makes the status of implementation particularly difficult to track.

This French-language meeting note aims to assess the implementation of the HIPPO report’s recommendations and to map the path forward, both for the remainder of 2016 and for the next secretary-general. The meeting note stems from a seminar IPI organized in Paris, France, on June 17, 2016, with the support of the French Ministry of Defense’s Directorate General for International Relations and Strategy (DGRIS).

The seminar discussions stressed that some recommendations, often the most straightforward and consensual, have already been implemented by the UN Secretariat (e.g., the creation of a planning and analysis cell in the Office of the Secretary-General and of a troop generation cell). Others are still being discussed or are in the process of being implemented. However, many of the more ambitious recommendations will require the sustained political and financial involvement of member states. Participants also discussed how peace operations are adapting to new environments, including by recognizing the need for better intelligence collection and analysis and by improving partnerships.

Participants also mentioned that, with the current secretary-general close to finishing his term, member states should formally request a report on the status of implementation of the HIPPO recommendations. However, they also stressed that member states should take ownership and carry forward some key HIPPO recommendations beyond the transition phase. In order to maintain this momentum, it is also important for the UN Secretariat and member states to remain mobilized and to move beyond rhetoric to action. The upcoming AU summit in Kigali in July, follow-on to the 2015 Leaders’ Summit in London in September, and summit on peace operations in francophone contexts in Paris in October can provide opportunities to do so.