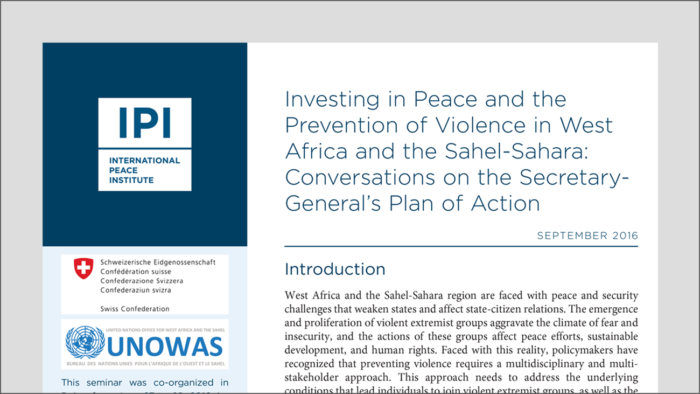 West Africa and the Sahel-Sahara region are faced with peace and security challenges that weaken states and affect state-citizen relations. The emergence and proliferation of violent extremist groups aggravate the climate of fear and insecurity, and the actions of these groups affect peace efforts, sustainable development, and human rights. Over the past decade, efforts to address violent extremism have consisted primarily of a series of security measures largely inspired by strategies used to fight terrorism, which have been inadequate and at times fuel violent extremism. This experience has led international organizations and states to adopt more preventive approaches, such as those detailed in the UN secretary-general’s Plan of Action to Prevent Violent Extremism.

In this context, the International Peace Institute (IPI), the UN Office for West Africa and the Sahel (UNOWAS), and the Swiss Federal Department of Foreign Affairs co-organized a regional seminar in Dakar, Senegal, on June 27 and 28, 2016. This meeting brought together sixty participants from fourteen countries, including political leaders, members of civil society, and religious and traditional authorities, as well as representatives of the media, the private sector, governments, and regional and international organizations, to explore alternative measures to address the violent extremism affecting the region.

Participants agreed on a number of recommendations with regards to how the UN and its partners could more effectively prevent violent extremism in West Africa and the Sahel-Sahara subregions, in support of national governments and local authorities and communities and with the active participation of citizens. These recommendations include the need to focus on political participation, improved state-citizen relations, and inclusive dialogue as the primary mechanisms for prevention. They also agreed on the importance of local and regional preventive initiatives, and the need for institutional initiatives to prevent violent extremism to build on existing ones at the regional level, while recognizing the central role and responsibility of states in prevention.