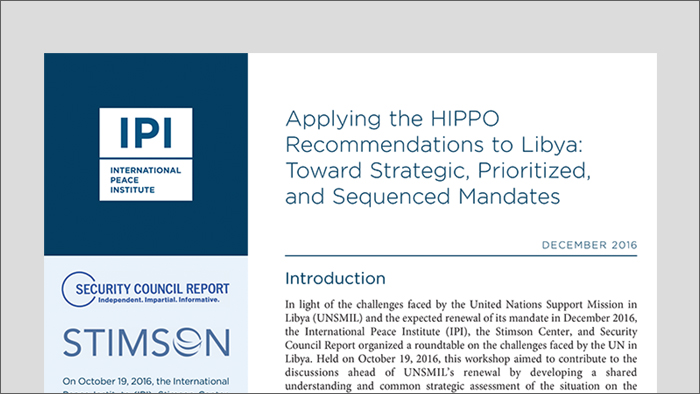 Despite the signing of the Libyan Political Agreement (LPA) and the appointment of the Presidency Council of the UN-backed Government of National Accord in December 2015, the situation in Libya remains precarious. The political process is extremely fragile, and security threats are ever-present and unpredictable. It is in this context that the Security Council is expected to renew the mandate of the UN Support Mission in Libya (UNSMIL) in December 2016.

In light of this situation, the International Peace Institute (IPI), the Stimson Center, and Security Council Report co-organized a workshop on October 19, 2016, to give member states and UN actors the opportunity to develop a shared understanding of the situation faced by the UN in Libya. This workshop was the second in the “Applying HIPPO” series, which brings together member states and UN actors to analyze how UN policies and the June 2015 recommendations of the High-Level Independent Panel on Peace Operations (HIPPO) can be applied to country-specific contexts.

Participants identified a number of challenges facing the UN mission in Libya and its ability to effectively support the Libyan Political Agreement and achieve its mandated activities, including social and political fragmentation, the UN-led political process’s lack of legitimacy, and the Presidency Council’s inability to deliver basic services. Given these challenges, participants identified six immediate priorities for UNSMIL that could be incorporated into its renewed mandate: (1) enhancing the legitimacy of the LPA framework; (2) supporting the delivery of basic services; (3) reinvigorating the constitution-making process; (4) supporting key Libyan institutions; (5) leveraging the lifting of sanctions and the arms embargo; and (6) coordinating international engagement.