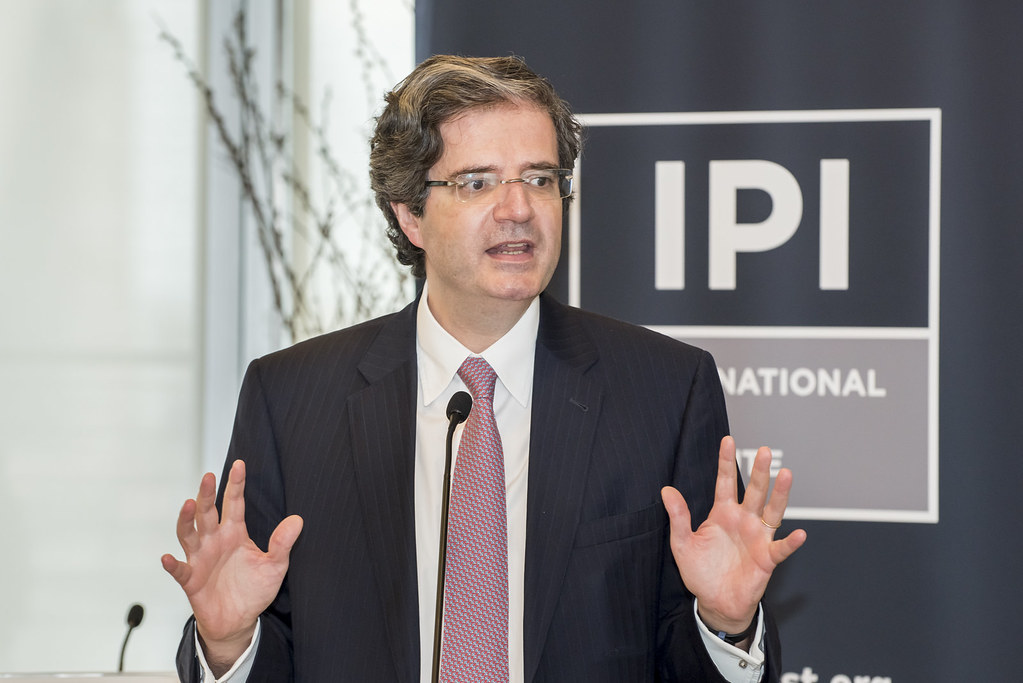 “To be successful, peacekeepers must have appropriate analysis, training, and support,” said François Delattre, France’s Permanent Representative to the United Nations.

Speaking at a day-long meeting at IPI on peace operations reform, Mr. Delattre noted, “As the face of the UN, effective peacekeeping is essential to UN legitimacy.” Highlighting the importance of peacekeeping, he added, “It is what reinforces the legitimacy and relevance of the multilateral system, which we know is under threat.”

Mr. Delattre made his remarks at a June 27, 2017 seminar held to discuss and analyze the state of UN peace operations reform two years after the release of the report of the High-Level Independent Panel on UN Peace Operations (HIPPO) and in light of review processes launched by Secretary-General António Guterres on the restructuring of the UN’s peace and security architecture and on management of the UN system.

On the eve of the presentation of the reforms proposed to the UN peace and security architecture, there is widespread consensus that current institutional arrangements are anachronistic in their structure, procedures, and priorities. Participants from across the Secretariat, UN member-states’ missions, and academia thus joined a closed-door discussion (under the Chatham House rule of non-attribution) on the current state of reforms to the UN, the challenges of ensuring better delivery in the field, and the extent to which these efforts respond to the new paradigm of prevention and sustaining peace.

Arthur Boutellis, Director of IPI’s Center for Peace Operations, noted that the secretary-general had outlined nine priority areas for reform at a meeting of the Security Council in April 2017; the report of the Internal Review Team (IRT) on the UN Secretariat’s Peace and Security Architecture will indicate how the first of these nine will be addressed. He also welcomed Ethiopia’s intention, announced at the same meeting, to host a high-level open debate on the implementation of the recommendations of the HIPPO report.

The three panels of this day-long seminar sought to connect the peace and security architecture reform to the past, present, and future of UN peace operations. The Permanent Representatives of Ethiopia, Norway, and the Republic of Korea, as co-chairs of the Group of “Friends of HIPPO” states, served as moderators for these discussions.

The first panel took stock of progress made on implementing changes recommended in the HIPPO report. It concluded that, even as there has been progress on a number of important technical and managerial issues, these changes do not add up to the fundamental shifts called for in the HIPPO report. The UN today has gone through an exhaustive degree of analysis as to how problems arise and may be resolved; that there are still delays in implementing these solutions indicates their politically challenging nature.

The second panel, which included presentations from Fabrizio Hochschild (Assistant Secretary-General for Strategic Coordination, EOSG) and Tamrat Samuel (head of the IRT on the peace and security architecture), discussed Mr. Guterres’ vision of a “more anticipatory and agile” UN, which is able to use not only the full spectrum of peace operations but also the entire range of tools and resources within the UN system to be more responsive and flexible in preventing, managing, and resolving conflict.

The third panel reviewed how peace operations could work for sustaining peace. It acknowledged the growing recognition of synergies between the 2030 Sustainable Development Agenda and the sustaining peace framework adopted in 2015, and emphasized that this will require peace operations to be conceived in a “whole of UN” or “Delivering as One” context, with particular attention to financing and budgetary mechanisms to ensure that funding streams for “security” and “development” are not treated as a zero-sum game.

Across the three panels, there was consensus that peace operations must be seen as only one part of holistic UN engagement with countries and regions, and that their ability to contribute to peace, stability, and development in countries where they are deployed will be contingent on the ability to convene and coordinate a range of actors, including UN system actors such as the country team and humanitarian agencies; local, national, and regional governments; regional and sub-regional organizations; local and international non-governmental and civil society organizations; and other international organizations, notably the international financial institutions and donors.

The seminar was organized with support from the French Ministry of Defense’s Department for International Relations and Strategy (DGRIS), and marks the culmination of the three-year “New Issues Observatory” project. In its third year, the project has focused on field support to UN peace operations; previous themes were Technology in Peacekeeping, and UN Peace Operations in Asymmetric Environments.