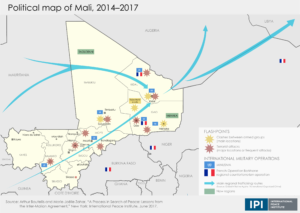 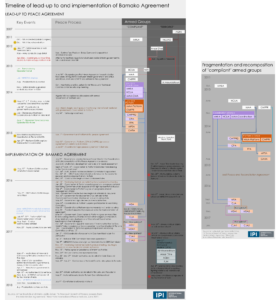 Timeline of lead-up to and implementation of Bamako Agreement; and Fragmentation and recomposition of “compliant” armed groups
(Click for full graphic) 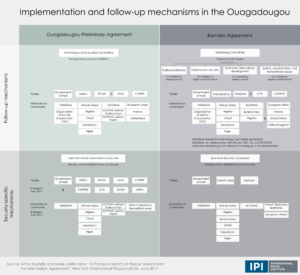 The 2015 Bamako Agreement was supposed to usher in a new era of peace and stability in Mali. However, not only has there been little progress in implementing the agreement, but the security situation remains volatile. This state of affairs is all the more troubling given the international community’s mobilization in support of the Malian state. Why, in spite of this mobilization, are some warning that the peace agreement is in danger of collapse?

The end of the Bamako Agreement’s two-year interim period on June 20, 2017, provides an opportunity to assess progress on its implementation. This report traces the difficulties of implementing the peace agreement by placing current events in Mali in the context of past peace processes in the country and the 2014–2015 Algeria-led mediation process. It focuses in particular on six key issues that have created challenges during implementation:

Based on these challenges, the report identifies a number of lessons for UN engagement in peace processes.

This publication is part of a project funded by ifa (Institut für Auslandsbeziehungen) with resources provided by the German Federal Foreign Office.

In January 2018 IPI translated this report into French and updated the translated version.