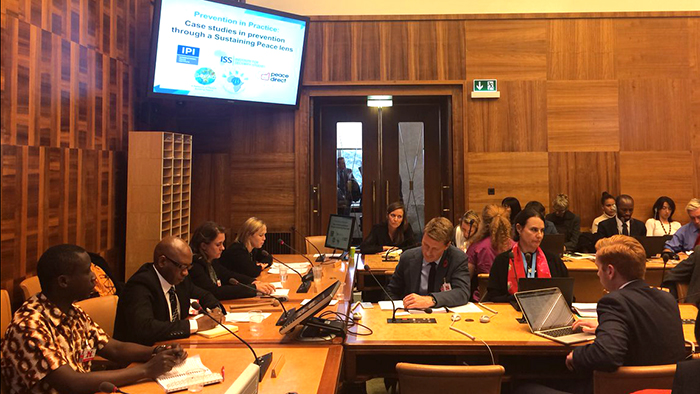 Geneva’s fourth annual Peace Week—held from November 6-10, 2017— focused on effective pathways for the implementation of prevention. The theme built off the dual resolutions in 2016 of the UN Security Council and General Assembly on sustaining peace.

Representing IPI was Lesley Connolly, IPI Policy Analyst, who participated in two panels; one, co-sponsored by IPI, Concordia and the Sustainable Development Goals Fund, on “The Role of Private Sector in Prevention,” and the other, co-sponsored by IPI, the Dag Hammarskjold Foundation, Global Partnership for the Prevention of Armed Conflict (GPPAC), Institute for Security Studies (ISS), and Peace Direct, on “Prevention in Practice: Case Studies in Prevention Through a Sustaining Peace Lens.”

In the conversation about the role of the private sector, Ms. Connolly honed in on three aspects of where it figured in the sustaining peace debate.

First, she said, was that businesses generally understand their role in development more clearly than their role in building inclusive and peaceful societies.

Secondly, she said, when investing in countries under stress, businesses need to go beyond the “do no harm principle” to focus not just on how to avoid fueling conflict but also on how to support the factors underpinning peace.

And third, she argued, was that all businesses’ operations and investment be tailored to be context-specific, people-oriented and crafted to be “transformative” rather than “transactional” and to strengthen public institutions and local communities.

As a governing principle, she contended, “it is important that sustaining peace is not seen as a rebranding of existing work but a new form of analysis and framing that includes all countries— not just those in conflict— and maps the positive resilience on the ground.”

In her second panel appearance, she spoke on “Prevention and Sustaining Peace in the Gambia” and broke her talk into four topics: effective and inclusive stakeholder analysis, the need to focus on holistic approaches to peace and development, unpacking and enhancing positive areas of resilience, the need for effective partnerships with regional and international actors, and challenges.

The Gambia, she said, presented a particular challenge because it was no longer on the Security Council agenda, had not been in conflict, had no peacekeeping operation, and was not in one of the Peacebuilding Commission’s country configurations.

In sum, she said, “As the Gambia moves forward toward consolidating its new government with the support of the regional and international community, there is a need as sustaining peace advocates to adopt an integrated approach to peace and development and to address the root causes of the fragility.”

She concluded her remarks by stressing the importance of including local actors in the process. “We believe that local people – those most directly impacted and living the realities of violent conflict – are the experts on the problems they face,” she said, “and that they know best what solutions are needed to make peace possible for their communities.”