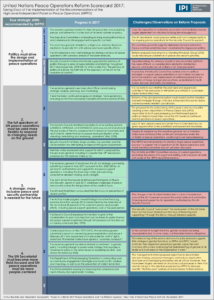 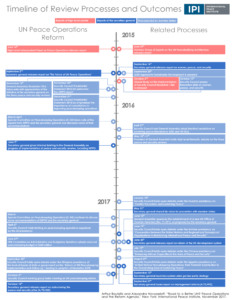 Timeline of Review Processes and Outcomes (Click for full graphic)

UN peace operations are confronting crises from all sides: they face ever more complex operating environments in the field, while in New York they face divisions among member states over the very nature of peace operations, a “peacekeeping fatigue” aggravated by scandals, and cuts to the peacekeeping budget. These are some of the reasons why, two years after the release of the report of the High-Level Independent Panel on Peace Operations (HIPPO), progress on peace operations reform has been slow.

In this challenging context, this report asks whether the reform agenda put forward by Secretary-General Guterres would—or would not—help realize the four strategic shifts called for by HIPPO—recognizing the primacy of politics, viewing peace operations as a continuum, strengthening partnerships, and focusing on the field and on people—and under what circumstances. It also provides preliminary analysis of the five streams of reform presented to date: (1) the renewed focus on prevention and sustaining peace; (2) the creation of a new UN Office of Counter-Terrorism; (3) the reform of the UN development system; (4) the restructuring of the peace and security architecture; and (5) organization-wide management reform.

It concludes that the challenge for the secretary-general will be to translate these parallel tracks of reform into a concrete and coherent approach that will be true to his overarching vision for the organization and have a real impact in headquarters and, most importantly, in the field. While the temptation inevitably will be to focus on short-term structural reorganization, change will also need to come from improvements in working culture, methods, and processes over time.