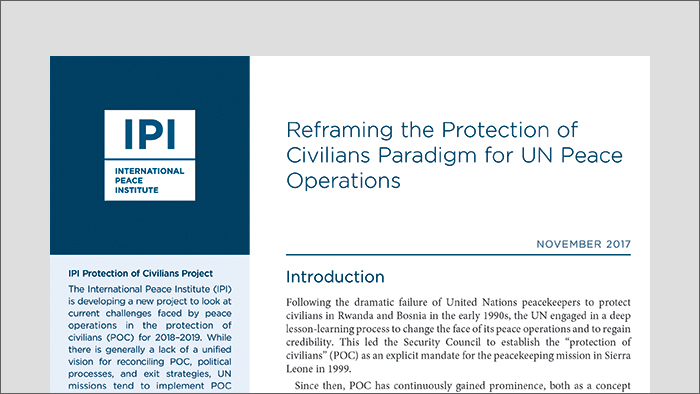 Since the late 1990s, POC has continuously gained prominence, both as a concept and in practice, and has become the mandated priority for most UN peacekeeping operations. However, while POC has become a centerpiece of peacekeeping for many stakeholders, it has also become diluted as a consensual label used to justify diverse actions and approaches.

This issue brief explores debates around the concept and practice of POC to reframe protection of civilians for UN peace operations. As the secretary-general intends to lay out his vision for POC and to launch a campaign to champion the agenda, and the Department of Peacekeeping Operations is expected to update its official policy on POC, this is an opportune moment to readjust perspectives.

It concludes that, when framing his vision for POC, the secretary-general should reassign meaning and legitimacy to POC as the core of sound political solutions, reinvest in the full range of armed and unarmed protection tools, favor tailored interventions in a context of budgetary cuts, and establish a meaningful accountability system.