Members of the Chadian contingent of the UN Multidimensional Integrated Stabilization Mission in Mali (MINUSMA) serving in the town of Kidal, Mali, December 19, 2016. (UN Photo/Sylvain Liechti) 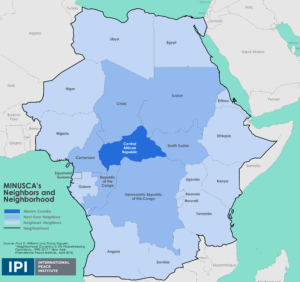 The last decade has seen more UN peacekeepers than ever before coming from countries neighboring the host state. This report uses the IPI Peacekeeping Database to explore this increase in neighborhood contributions between 1990 and 2017. While less than 3 percent of all UN peacekeepers came from next-door neighbors in the early 1990s, this number had increased to about 20 percent by 2017.

This trend runs counter to a longstanding, if unwritten, principle that UN peacekeeping missions should seek to avoid deployment of troops or police from neighbors in order to mitigate the risks associated with these countries’ national interests in the host countries. It also means there would be significant implications if policymakers wished to reverse this trend, which would put major additional pressure on the UN’s force generation process.