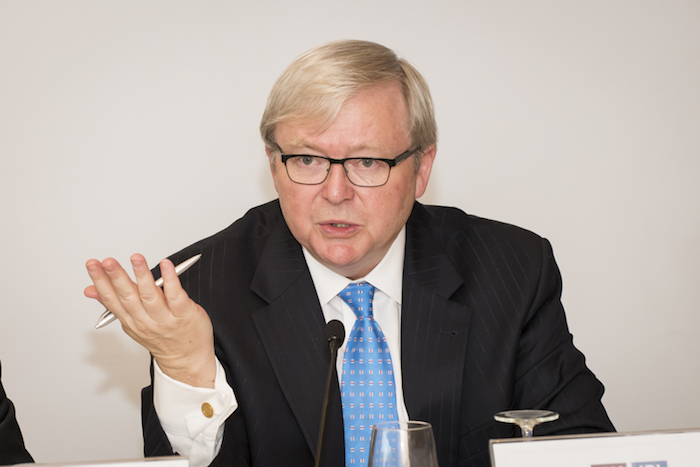 The International Peace Institute (IPI) is pleased to announce the Honorable Kevin Rudd has been elected unanimously by IPI’s board of directors as the board’s next chair, effective June 01, 2018. Mr. Rudd was Vice Chair of IPI’s board since June 2014.

Mr. Rudd succeeds Professor Michael Doyle, Director of the Columbia Global Policy Initiative at Columbia University, who has served as interim Chair since May 2016. Dr. Doyle was Vice President of IPI (then IPA) from 1993-1996 and has been on IPI’s board since 1997.

“On behalf of the staff of the Institute, I would like to thank Professor Michael Doyle for his outstanding work in various capacities at IPI, where he has served for over 20 years. Michael has consistently shown extraordinary loyalty and dedication through his valuable contributions to IPI. He has skillfully mentored numerous young researchers over the years, who now serve important positions in international organizations, governments, academics, and non-governmental organizations across the globe. I would like use this opportunity to thank my friend Michael for the exceptional work he has done for IPI and the good of the global community we are serving.

The Honorable Kevin Rudd has served with extraordinary skills and dedication as the Vice Chair of the board of directors of IPI since 2014, and has lent invaluable support to the Chair of the board and the President and CEO. Through his chairmanship of IPI’s Independent Commission on Multilateralism (ICM), he was a skillful helmsman who, together with his fellow members and IPI staff, produced a series of reports which gave new perspectives to the challenges of the future of the multilateral system, and guidelines and advice on how to address the dangers and opportunities alike. I would like to warmly welcome Kevin as our new Chairman. And I am looking very much forward to working closely with him in pursuing IPI’s objectives of peace and reconciliation through policy research, advice, and our convening and outreach capacity.”

Mr. Rudd served as Australia’s 26th Prime Minister from 2007 to 2010, then as Foreign Minister from 2010 to 2012, before returning to the Prime Ministership in 2013. As Prime Minister, Mr. Rudd led Australia’s response during the Global Financial Crisis. Australia’s fiscal response to the crisis was reviewed by the IMF as the most effective stimulus strategy of all member states. Australia was the only major advanced economy not to go into recession. Mr. Rudd is also internationally recognized as one of the founders of the G20 which drove the global response to the crisis, and which in 2009 helped prevent the crisis from spiraling into a second global depression.

As Prime Minister and Foreign Minister, Mr. Rudd was active in global and regional foreign policy leadership. He was a driving force in expanding the East Asia Summit to include both the US and Russia in 2010. He also initiated the concept of transforming the EAS into a wider Asia Pacific Community to help manage deep-routed tensions in Asia by building over time the institutions and culture of common security in Asia. On climate change, Mr. Rudd ratified the Kyoto Protocol in 2007 and legislated in 2008 for a 20% mandatory renewable energy target for Australia. Mr. Rudd drove Australia’s successful bid for its non-permanent seat on the United Nation’s Security Council and the near doubling of Australia’s foreign aid budget.

Mr. Rudd remains engaged in a range of international challenges including global economic management, the rise of China, climate change and sustainable development. In 2015-16, Mr. Rudd led a review of the UN system as chair of the Independent Commission on Multilateralism. In February 2014, Mr. Rudd was named a Senior Fellow with Harvard University’s John F. Kennedy School of Government, where he completed a major policy paper, U.S.-China 21: The Future of U.S.-China Relations Under Xi Jinping. He is Chair of Sanitation and Water for All, a Distinguished Fellow at Chatham House in London, a Distinguished Statesman with the Center for Strategic and International Studies in Washington, and a Distinguished Fellow at the Paulson Institute in Chicago. Mr. Rudd is a member of the Comprehensive Nuclear Test-Ban Treaty Organization’s Group of Eminent Persons. He serves on the International Advisory Board of the Schwarzman Scholars program at Tsinghua University, and is an Honorary Professor at Peking University. Mr. Rudd is proficient in Mandarin Chinese. He also remains actively engaged in indigenous reconciliation.

The International Peace Institute is an independent, international not-for-profit think tank dedicated to managing risk and building resilience to promote peace, security, and sustainable development. To achieve its purpose, IPI employs a mix of policy research, strategic analysis, publishing, and convening. With staff from more than twenty countries and a broad range of academic fields, IPI has offices across from United Nations headquarters in New York and offices in Vienna and Manama. IPI’s research covers aspects of peace, cooperation, and multilateralism including UN reform, peace operations, sustaining peace and prevention, peace and health, humanitarian affairs, WPS (women, peace and security), and the intersection of the Sustainable Development Goals and peace. IPI also produces the analysis website The Global Observatory.