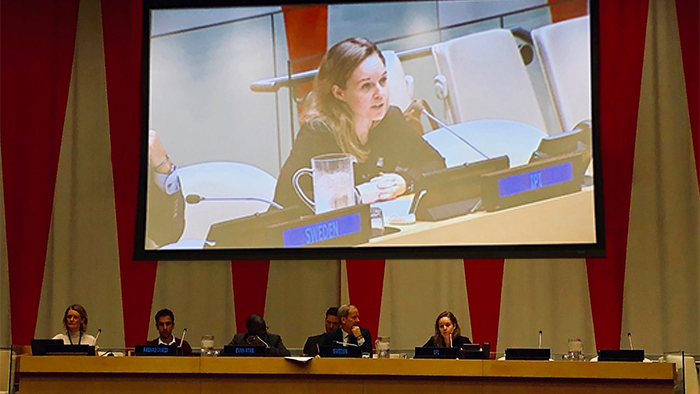 On December 21, 2018, International Peace Institute (IPI) Policy Analyst Alice Debarre briefed the United Nations Security Council Open Arria Meeting on “Protecting Medical Care in Armed Conflict—from Policy to Practice.” Ms. Debarre outlined some of the key international humanitarian law norms relating to medical care in armed conflict, and explained the significance of Security Council resolution 2286, which reaffirmed the relevance of international humanitarian law. She then provided thoughts on how these challenges in provision of services can be overcome.

One of the foundational principles of international humanitarian law, codified in the First Geneva Convention of 1864, is that all wounded and sick—including combatants—are entitled to medical care, she explained.  From this principle, a series of obligations have been delineated in subsequent treaties. Key among these are that parties to armed conflict must protect the wounded and sick from ill treatment and that killing or causing suffering or injury to those wounded and sick is strictly prohibited. Another obligation is that parties to armed conflict are required to protect and respect medical personnel, transport and facilities, and that the wounded and sick must be treated without distinction on any basis other than their medical condition. Also, medical personnel cannot be punished for providing such impartial care.

In the years preceding the May 2016 adoption of Resolution 2286, the world was shocked by a spike in brutal violence against healthcare personnel and facilities in countries affected by armed conflict. The adoption of the resolution was evidence that the council heeded the urgent call from medical and humanitarian organizations on the ground to address this concern.

The adoption of resolution 2286 also represented a strong political commitment to protect the sanctity of healthcare delivery in armed conflict. It created momentum for positive efforts to tackle this issue. As requested by the resolution, the Secretary-General published a list of ambitious and concrete recommendations for its implementation in August 2016. Last year, France led the signing of a political declaration on the protection of humanitarian and health workers. Some countries—notably Sweden—engaged in internal reviews of their laws and military doctrine. The World Health Organization (WHO) developed a surveillance system of attacks on healthcare.

On the ground, there is an unabated flow of attacks on healthcare. Three key types of challenges in armed conflict contexts are:

Ms. Debarre then recommended ways to overcome these challenges. First, she said, we can insure we make more systematic use of existing international and other mechanisms to investigate attacks against healthcare—not just for the purpose of ensuring accountability, but also in some cases to understand what happened, and whether systems can be put in place to prevent future attacks.

Second, we can also include clear exemptions for the provision of medical care in counterterrorism measures, to protect health workers’ ability to do their job and provide impartial care. Finally, she concluded, it is important we better understand what it means to be a health worker in the country contexts in which the issues we are talking about play out, and to hear what changes these health workers think are necessary.

“We have a robust, longstanding normative framework and clear principles,” she said. We have knowledgeable actors willing to guide and support in their implementation, some coming all the way from Afghanistan and South Sudan. We need states to take concrete action to uphold the fundamental norm that those who are wounded and sick have access to the medical care they need.”