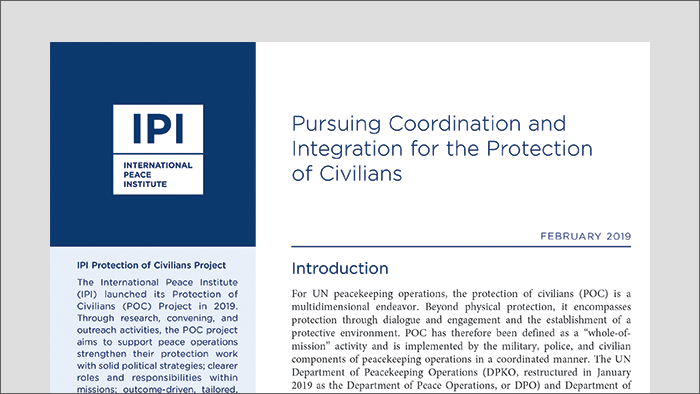 In recent years, the UN and its member states have promoted comprehensive approaches and integrated structures and processes to improve coherence and consistency between political peacekeeping, humanitarian, human rights, and development efforts undertaken by the UN and its partners. For POC specifically, coordination between the military, police, and civilian components of peace operations; between peace operations and UN agencies, funds, and programs; and between the UN system and other protection actors has been pursued to maximize impact in the field. Joint planning, analysis, and action at these three levels are key to leveraging different types of expertise, tools, and responses in a holistic way in order to better prevent and respond to threats to civilians.

However, while the UN’s normative and policy frameworks provide the basis for coordination and organizational arrangements have been set up to facilitate integrated efforts at these three levels, recent developments in the peace and security sphere have reinvigorated the debate over the costs and benefits of integration. Coordination for POC has proven to be increasingly difficult in non-permissive environments where, for example, peacekeepers may be perceived as party to the armed conflict or as having too close or tense a relationship with the host state or non-state actors. Integration in such contexts has led to debates around the preservation of humanitarian space, the independence of human rights advocacy, and the security of actors too closely linked to peacekeeping efforts.

This issue brief analyzes the costs, benefits, and challenges of coordinated and integrated approaches to POC in peacekeeping contexts. It considers the added value of mission-wide and system-wide coordination for POC and concerns over comprehensive coordination between peacekeeping and humanitarian actors, which have different rationales and methodologies for protection. In a context of UN reform emphasizing prevention and political strategies, it questions the political and institutional push for more comprehensive POC strategies and reflects on the associated risks. It also offers considerations for how to coordinate and integrate multi-actor efforts in order to better protect civilians.