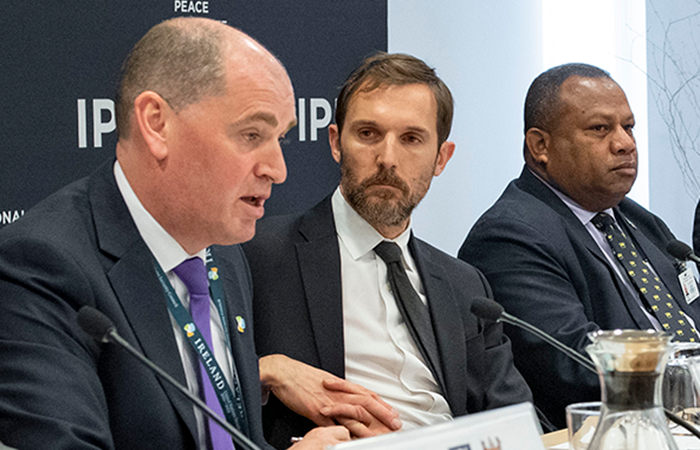 An IPI public event on Implementing Action for Peacekeeping (A4P) focused on the importance of operational partnerships between troop contributing countries (TCCs) and featured two member states in the United Nations with deep historical ties to peacekeeping—Fiji and Ireland.

The event was held on March 27th, two days before the 2019 United Nations Peacekeeping Ministerial on Uniformed Capabilities, Performance & Protection that built on the ongoing effort to strengthen peacekeeping operations through the A4P initiative.

“The word collaboration is at the heart of UN peacekeeping,” said Paul Kehoe, Ireland’s Minister for Defence. “No one state can go alone…We need to look at how we develop further flexible and innovative mechanisms that would support member state partnerships–the building of peace demands the labors of many. Let’s ensure that we put in place mechanisms that allow the many to take part.”

Inia Seruiratu, Fijian Minister for Defence, National Security & Foreign Affairs, agreed, saying, “For small developing countries like Fiji, partnerships are the way forward. It is the new model of peacekeeping for us.”

Ciaran Murphy, Policy Director, Assistant Secretary-General of Ireland’s Department of Defence, explained, “We can’t deploy on our own, we need partners, and we need the support of partners…As long term TCCs, we connect as a bridge, to those countries that want to return to UN peacekeeping, working with like-minded states, potential new contributors, developing states. Through 60 years of peacekeeping we have a lot of lessons learned, there’s a lot of knowledge and information and experience we can share.”

Both ministers stressed the importance of involving women in peacekeeping and curbing sexual exploitation and abuse (SEA) by peacekeepers. “Ireland welcomes the strong focus on zero tolerance of SEA, and stands with the Secretary-General in the circle of leadership to ensure that the spotlight remains shining on this specific issue,” said Mr. Kehoe. “Participation of females in peacekeeping is essential,” said Mr. Seruiratu. “Fiji fully supports the UN gender parity strategy and is doing its best to achieve its standards.”

Another subject that drew the attention of the two ministers was the importance of good training. “Troop contributing countries have a responsibility to ensure that troops they deploy are capable of the tasks we give, in full respect of their responsibilities to uphold peace and respect the rule of law. As troop contributors, we must be honest about where are the gaps, identifying training needs, but also opportunities,” said Mr. Kehoe.

Mr. Seruiratu mentioned the expectations he had for coordination with the UN. “We need the UN to improve how it does peacekeeping, from the drafting of mandates, the management of resources, mission leadership, and the performance of missions,” he said.

Mr. Kehoe detailed some of the rules and responsibilities of the troop contributing countries, including protecting civilians and the peacekeepers themselves. “We are all aware that there is continuing tension between the list of tasks our troops are required to deliver and the resources provided to achieve them,” he said. “We should not promise more than we can deliver. We should be ambitious for ourselves, but not to the point we are jeopardizing the safety of the civilians we vow to protect, or lives of those we assign those tasks.”

When it comes to peacekeeping, Mr. Seruiratu stated, the stakes couldn’t be higher. “When the UN does peacekeeping well, we save lives,” he said. “When we plan to do peacekeeping poorly, lives are lost.”

The discussion was moderated by Jake Sherman, Director of IPI’s Brian Urquhart Center for Peace Operations.