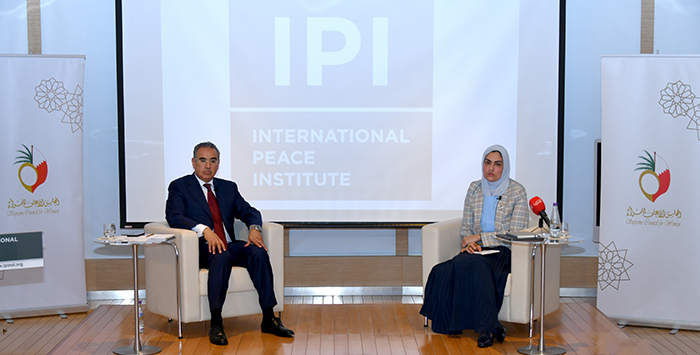 The Secretary-General of Bahrain’s Supreme Council for Women, H.E Hala Al-Ansari, called on women and men alike to work together in achieving equal participation of women in relation to the Sustainable Development Goals (SDGs). “We need to carry out our responsibilities as humans, rather than separate genders,” she said, adding that women do not need to solely rely on men to empower themselves.

Addressing a large audience of women in leadership, ambassadors, government officials, dignitaries, religious leaders, and media gathered at IPI MENA on April 11, 2019, Al-Ansari emphasized the progress made by Bahraini women in policy, public and private sectors, noting that “Bahrain is ranked first in the Arab world and 47th globally according to the World Bank’s Human Capital Index, and fourth in the Gulf and 43rd globally according to the UN Human Development Report 2018.”

The event was opened by IPI MENA Policy Analyst Dalya Al-Alawi, and moderated by IPI MENA Director Mr. Nejib Friji, who noted that the work of the SCW is in line with the SDGs and IPI goals related to women’s leadership and the promotion of women at all levels of decision-making, political involvement and peacemaking.

In response to a question by Mary Justine Todd, Founder of Women’s Crisis Care International, about SCW initiatives regarding domestic and sexual violence, Al-Ansari cited progress regarding legislation and law enforcement steps and called for additional preventative measures as well as the streamlining of gender equity in all layers of society. “We must go to the root of domestic and sexual violence and change the mindset of how the genders express themselves, beginning with education, institutions and teaching the skills of peaceful relations from kindergarten to high levels of education,” she said.

Answering a question from Yemen’s Ambassador to Bahrain, Dr. Ali Hassan Al Ahmadi, on whether women’s quotas would be envisaged as a means of inclusion and advancement, Hala Al-Ansari stressed that these allocations are not always true measures of progress. She called for greater accountability in the field of women’s advancement through the implementation of evaluation mechanisms in the public and private sectors.

Responding to Fatema Al Kooheji, Chairperson of the Shura Council’s Senate for the Women and Children Committee, on the role of the media in women’s advancement and participation, Al-Ansari noted the relative progress of the media concerning women’s issues. Still, she called for further development in media’s approaches to assessment, coverage, analysis of gender equity, women’s participation in line with the SDGs. She highlighted the important role of media, adding that it is crucial to convey an accurate and constructive message. However, she noted that media should “neither draw a bleak picture nor over-exaggerate women’s achievements.”