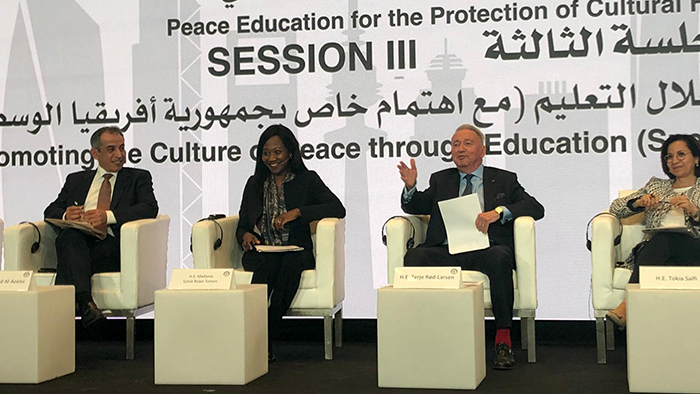 The definition of peace has shifted in the United Nations community from the absence of conflict to a more active, “positive peace.” Looking at peace from this perspective requires a shift in focus from identifying and combating the causes of wars to understanding the factors that foster peace and inclusivity. To view a holistic perspective of peace, it is necessary to explore the connections among culture, peace, security, and development.

The “culture of peace” recognizes the link between peace, development, and human rights. Defined in 1999, the term seeks to tackle the root causes of conflicts emphasizing the importance of dialogue, negotiation, and cooperation among individuals, groups, and nations.

On June 13, 2019, the first annual World Forum for the Culture of Peace took place in The Hague on “Peace Education for the Protection of Cultural Heritage.” It was organized by the Abdulaziz Saud Albabtain Cultural Foundation with support from IPI, the International Committee of the Red Cross, the University of Leiden, and the Carnegie Foundation.

High-level representatives from around the world discussed the importance of peace education for the protection of cultural heritage with a particular focus on Iraq, Yemen, and the Central African Republic. The day-long forum ended with “Messages for Peace” from global leaders including:

In Session III of the forum, IPI President Terje Rød-Larsen moderated a panel on Promoting the Culture of Peace through Education.