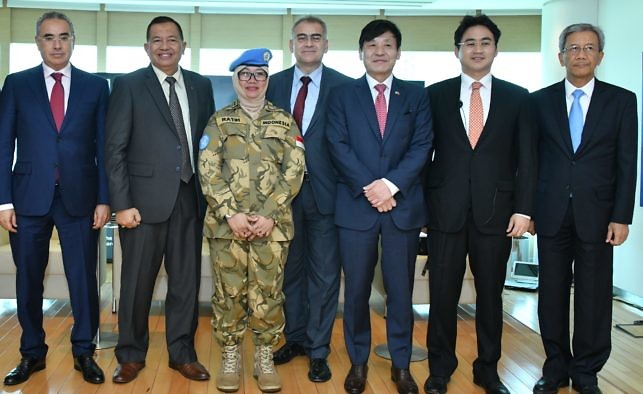 What contributions have the countries of the informal partnership between Mexico, Indonesia, the Republic of Korea, Turkey, and Australia (MIKTA) made to United Nations peacekeeping operations, and and how can the MIKTA model for international cooperation address the future challenges of peacekeeping?

These questions were the subject of an October 2nd seminar held at IPI’s MENA office in Manama. At the meeting, government officials, ambassadors, representatives of civil society, the private sector, and the media discussed priorities for strengthening peacekeeping initiatives, and highlighted the successes and challenges that their countries have found in peacekeeping missions.

Lt. Colonel Ratih Pusparini, of Indonesia’s National Defense and Security Agency—one of the first women in peacekeeping in Indonesia—stressed the importance of visibility for women peacekeepers in local communities.

“Women and children can approach women peacekeepers more easily in conflict areas, especially victims of gender-based violence,” she highlighted, while emphasizing the need to improve access and support for women in local peacekeeping contexts.

Lt. Pusparini called for greater commitment to women’s inclusion by senior leaders and commanders, and said that this could be achieved through public policy, corporate plans, cultural reform, and resourcing.

She also recommended the creation of a Global Gender Advisory network to ensure that gender perspectives are understood across divisions of operations. “More special training for women must be provided beyond areas which are perceived as ‘feminine duties,’” Lt. Purparini stressed, “such as medical, logistics or administrative duties.”

Major General Imam Edy Mulyono, Former Force Commander of United Nations Mission for the Referendum in Western Sahara (MINURSO), outlined the importance of the Western Sahara as geographically strategic, as it borders Morocco, Algeria and Mauritania. He also underlined some of the challenges he faced as former MINURSO Force Commander.

These challenges included violations on agreements, reductions of water supplies as a form of uncooperative action, and logistical issues such as flash flooding in 2014, which worsened the threat posed by landmines and explosive remnants of war.

To address these cases, he stressed the importance of forging a relationship between the host country and coordinators to foster effective communication in peacekeeping efforts.

Kemal Dermirciler, Turkey’s Ambassador to Bahrain, noted that his country’s contributions to peacekeeping operations, which began in 1950 during the Korean War, had been both peace support through military participation, as well as international missions where military personnel were assigned as international observers.

Dongsuk Kim, Assistant Professor of the Korea National Diplomatic Academy, noted that the rapid development of Korea’s economy in the 1970s and 1980s enabled the country to achieve the status of a middle power nation. He explained that

“Korean leaders thought that they needed to dispatch troops to peacekeeping missions in a bid to fulfill the duty of a middle power country and return the favor.”

Dr. Kim said that the demand for peacekeeping forces exceeds supply, and added that “Korea needs to find ways to sustain civil-military operations after troop withdrawal.”

Nejib Friji, Director of IPI MENA, highlighted MIKTA’s aim of strengthening multilateralism and global governance structures at a critical time of mistrust in the multilateral system, adding that their objectives are in line with IPI’s strategic goal of managing risk and building resilience for a more peaceful world.

Referencing the UN’s Action for Peacekeeping initiative (A4P), he explained that IPI, through research and convening, “is committed to helping the UN and member states advance the A4P agenda.” This, he said, is the “opportune time to reflect on the contribution that MIKTA can make to peacekeeping both collectively and individually.”

The presentation was followed by an interactive session with the audience. During this session, UN Resident Coordinator Amin Sharkawi pointed out that the percentage of UN women peacekeepers was 3.9% in the military, 10% in policy missions, and 28% of international civil personnel.

He commended Indonesia for leading reform in UN peacekeeping, and highlighted the importance of a Muslim country at the forefront of calls for greater involvement of women in peacekeeping.

The Ambassador of the Islamic Republic of Pakistan, Afzaal Mahmood, noted that Pakistan’s Army had the third largest number of soldiers in UN Peacekeeping Missions. He said that the lesson learned from Pakistan’s wars in 1948, 1965, and 1971 was that “war is not the solution.” He added that “we would like to talk more about how to make peace so that post conflict management is not required.”

“We do believe in the added value of peacekeeping operations and the role of the UN in addressing those challenges through prevention,” he stated. “Italy’s approach is specifically oriented to creating bridges and to stress the link between military and civilian activity for stability to have a good relationship.”

The Moroccan Ambassador, Mostafa Benkhayi, in a right of reply to Major General Mulyono, played down what Mulyono cited as challenges faced by MINURSO in Morocco.