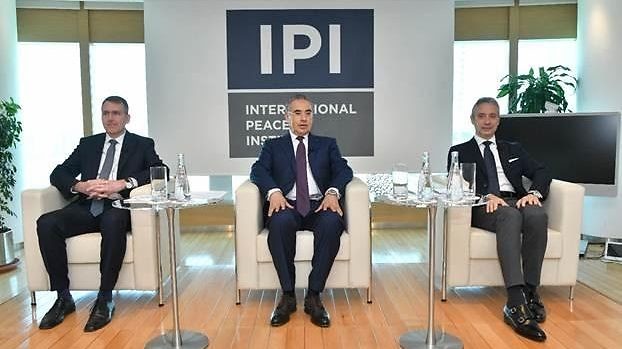 Kai Boeckmann and Jérôme Cauchard, Ambassadors of Germany and France to Bahrain, made a joint presentation on “Regional Integration: Reflections & Lessons Learned” during the first session of IPI MENA’s “Ambassadorial Conferences Series” on February 26th. Together with the audience, the two presenters exchanged ideas on regional integration and evaluated the progress that European countries had made in their integration process since 1954. Participants focused on lessons about international cooperation from the European Union.

Mr. Boeckmann spoke on the freedom of movement that a European passport facilitated within EU countries. He also pointed to the European Central Bank in Frankfurt, an EU institution, which, he said, “is more than German.” With its Italian president, he added, the bank “is a reflection of European sovereignty and cooperation.”

Despite Brexit, Mr. Boeckmann said, the attractiveness of the EU has not diminished, and pointed to Albania, North Macedonia, and other Baltic states’ application to join the regional union.

Mr. Cauchard called the European banknote a symbol of the interconnectedness of EU member states and their common history. He also stressed the fundamental importance of good leadership in integration. He cited the relationship between the two EU pioneers Konrad Adenauer, Chancellor of Germany, and Charles De Gaulle, President of France, who in 1958, put their differences aside in favor of European integration.

“Education is critical,” Mr. Cauchard stated, and said that the fruits of the EU founders’ labour were reflected in the nine million French and German exchange students studying abroad. He reflected on the bonds that Erasmus European exchange programs had created among students from diverse member states abroad, and suggested that these connections contributed to conflict prevention.

The presentation was followed by an interactive session involving government officials, diplomats, representatives of civil society, the private sector, academia and the media.

Libyan Ambassador Fawzi Abdelali highlighted a growing need to take into account political realities and to ensure that equality is at the core of new types of regional cooperation. He made note of Libya’s regional significance and its impact on Tunisia and other sub-Saharan states.

Tunisian Ambassador Slim Ghariani reminded the audience of the origins of the EU, through the alliance of coal and steel industries, and as a demonstration of goodwill among leaders of the time. He also remarked that EU foreign policy lacked unity and clout.

Bahrain Shura Council (Senate) member Darwish Al-Mannai noted the disintegration of the MENA region into smaller subregions, which, he said, could jeopardize the Arab efforts of building a united project.

Japanese Ambassador Hideki Ito raised a point about the growing challenges of nationalism and populism currently facing the EU.

Italian Ambassador Paola Amadei acknowledged the difficulties that Europe is facing in terms of populism and common foreign policy, and said that they were part of every process of regional integration.

Moroccan Ambassador Mostafa Benkhayi suggested the term “continental integration” in reference to the EU’s unity, noting that for it to be “regional,” it must encompass its direct neighbours such as North Africa and transcend ethnicities, religion and immediate location.

The presentation was moderated by Nejib Friji, Director of IPI MENA, who highlighted IPI’s efforts to promote regional integration. “There is a pressing need to address challenges collectively and to create an environment conducive to solving the major political crises of the day,” he stated, underlining the need for homegrown solutions while taking lessons learned from the European examples.