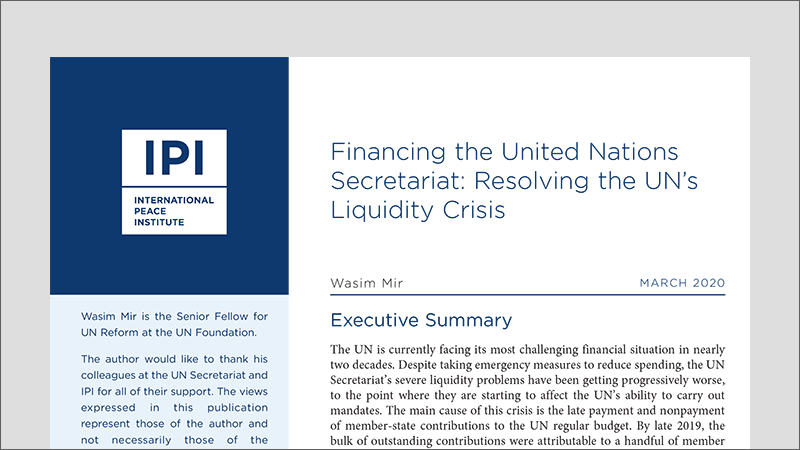 The UN is currently facing its most challenging financial situation in nearly two decades. Despite taking emergency measures to reduce spending, the UN Secretariat’s severe liquidity problems have been getting progressively worse, to the point where they are starting to affect the UN’s ability to carry out its mandates. The main cause of this crisis is the late payment and nonpayment of member-state contributions.

This issue brief breaks down the reasons why certain member states have not been paying in full or on time, which include the withholding of payments to express concerns about specific UN activities and domestic financial difficulties. It then considers the proposals the secretary-general has put forward to address the crisis: replenishing the existing reserves, incentivizing member states to make timelier payments by invoking Article 19 of the UN Charter sooner, and limiting the General Assembly’s use of creative measures to reduce spending. Since these proposals currently have little backing from member states, the paper also suggests looking at alternative approaches, including allowing the UN Secretariat to borrow commercially or pool cash balances.

As the domestic dynamics that lead to late payment and nonpayment will not change quickly, the paper urges member states not to ignore the issue and hope that it will resolve itself. They need to urgently consider what measures could help mitigate the crisis as soon as possible.