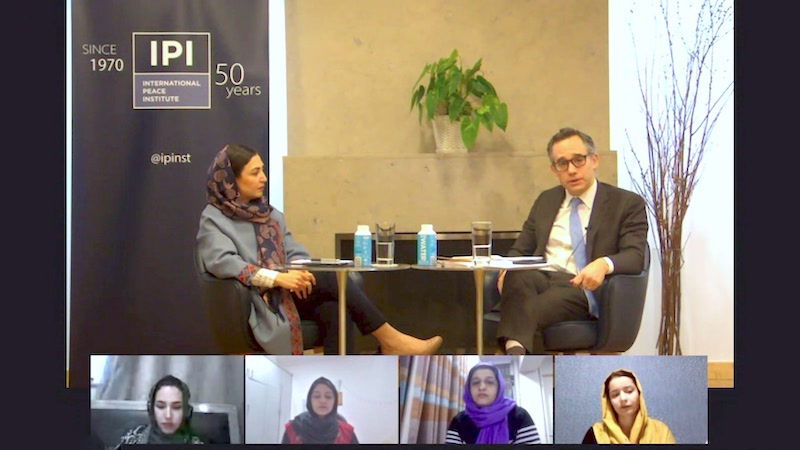 Adela Raz, Permanent Representative of the Islamic Republic of Afghanistan to the UN and IPI Vice President Adam Lupel

Afghan women have been at the forefront of bringing peace and development to Afghanistan over the past two decades, but despite this, peace talks and political processes have with few exceptions excluded them.

The Taliban and the United States reached a deal in February arranging for the withdrawal of US troops from Afghanistan and setting the stage for talks between the Taliban and the Afghan government. Though women’s rights were not mentioned in the text of the Taliban-US agreement and no female civil society representatives from Afghanistan participated in the talks leading up to it, Afghan women are determined that the upcoming intra-Afghan negotiations protect and enhance the equal rights assured them under the Afghan constitution, including their role in the peace process itself.

On Thursday, March 12th, IPI, together with the Permanent Mission of Afghanistan to the United Nations, hosted an online, live-streamed discussion with four prominent Afghan women leaders in Kabul on the subject of Women’s Inclusion in the Afghan Peace Talks.

Participating in the discussion from Kabul were Hasina Safi, Minister for Information and Culture; Nadima Sahar, Head of the Technical Vocational Education and Training Authority; Onaba Payab, Adviser to Rula Ghani, the First Lady of Afghanistan; and Aisha Khurram, Afghanistan’s Youth Representative to the UN.

Adela Raz, Permanent Representative of the Islamic Republic of Afghanistan to the UN, opened the discussion from IPI’s office in New York by stressing the progress that women have made in Afghanistan.

“Women empowerment in Afghanistan is real, it’s genuine, it truly has happened, and I always say that it’s an investment by the international community that really paid off in terms of where we started 19 years ago and where we are now,” she said. “Nineteen years may seem too long ago to worry about, but for a lot of us, it is not too long because we still remember the dark days of the Taliban.”

She asserted that a key principle that women are fighting for now is “inclusivity, and that inclusivity for us means the inclusion of women and also the voice of youth and different ethnic groups.” She said that women are also demanding that the teams of negotiators and facilitators of the talks reflect this inclusivity.

Though those memories of the restrictive Taliban practices are still fresh, she said women will not be revisiting them in the negotiations but rather exercising their hard won present authority and making sure none of it is relinquished. “We’re always able to compromise the past to enable us to coexist with a group of people that we have known for their having committed a lot of crime, but it’s too hard for us to compromise the future.”

Onaba Payab said that women had emerged as leaders in all walks of life in Afghanistan, with 25 percent of the seats in the parliament occupied by women and 5,000 businesses owned by women. Some 15,000 women from 34 provinces had been consulted on what would be acceptable to them in a peace agreement, she said. “We have protective legal frameworks for women’s public and private institutions and a long term plan designed to empower women in rural as well as urban areas.” She described the attitude of women in advance of the intra-Afghan talks as “we know that peace is achievable, and we are moving towards it guided by the principles of inclusivity, dignity and sustainability.”

Hasina Safi said that Afghan women had achieved much on their own at home and would insist on their ideas being treated seriously in the talks, but an element that was crucial now was the active support of Afghanistan’s friends abroad. “We have all the strategies and policies and know what is needed to implement them, and what we need from the international community is for them to back us up. Afghanistan is not the Afghanistan of 1995 where a woman could not introduce herself in front of a foreigner. Today, that woman speaks up, and she analyses, and she reasons, and she fights for her role for her existence for her very meaningful participation in the process, and protecting that is one of the requirements we would like the international community to recognize.”

Nadima Sahar illustrated the new confidence of Afghan women by noting that while she had had to struggle to ensure her right to an education, “now we have kids like my 8-year-old girl who aspires to be the first female president of Afghanistan.”

She argued that the stakes are much higher for women than for men. “For a man, this entire process boils down to growing a beard or shaving a beard. For us women, there is a lot more at stake, our right to an education, our right to live basically, our right to everything is at stake.” For that reason, she said, women had to be present at the negotiating table. “If there is a compromise that needs to be made for their future, they must have a say in what is that decision and what price they have to pay.”

Another asset that women bring to the talks, she said, is their impartiality and bent for seeking non-violent solutions. “Whenever men encounter a peace process, their discussions revolve around military action and power-sharing arrangements and territorial gains, but women’s involvement in the peace process would make sure that issues such as political and legal reforms, social and economic recovery and transitional justice are priorities.”

Elaborating on that point, Aisha Khurram argued that any agreement reached that did not include the active participation of women would be neither durable nor sustainable. “And women should not be included just in the formal negotiation, but they also must be part of the design and implementation of whatever agreement emerges.”

Two thirds of the Afghan population is under the age of 25, and Ms. Khurram said that young women consider themselves “active partners” in forging a peace for Afghanistan’s future rather than “passive beneficiaries” of the process. Similarly, she said, “the new generation of Afghan men really believe in women’s rights, and they really stand for their sisters’ rights.”

Stressing that this is a “pivotal moment” for young women in Afghanistan, she concluded, “Right now the future of Afghanistan is going to be decided so it’s more important for us than just the elites who are sitting there at the negotiating table and talking about our future. We expect more, and we deserve to be heard, and we deserve to be included.”

IPI Program Administrator Masooma Rahmaty reported on a tweet chat about women’s inclusion that she had conducted, some of it in Farsi, with 40 respondents from Kabul and the diaspora.