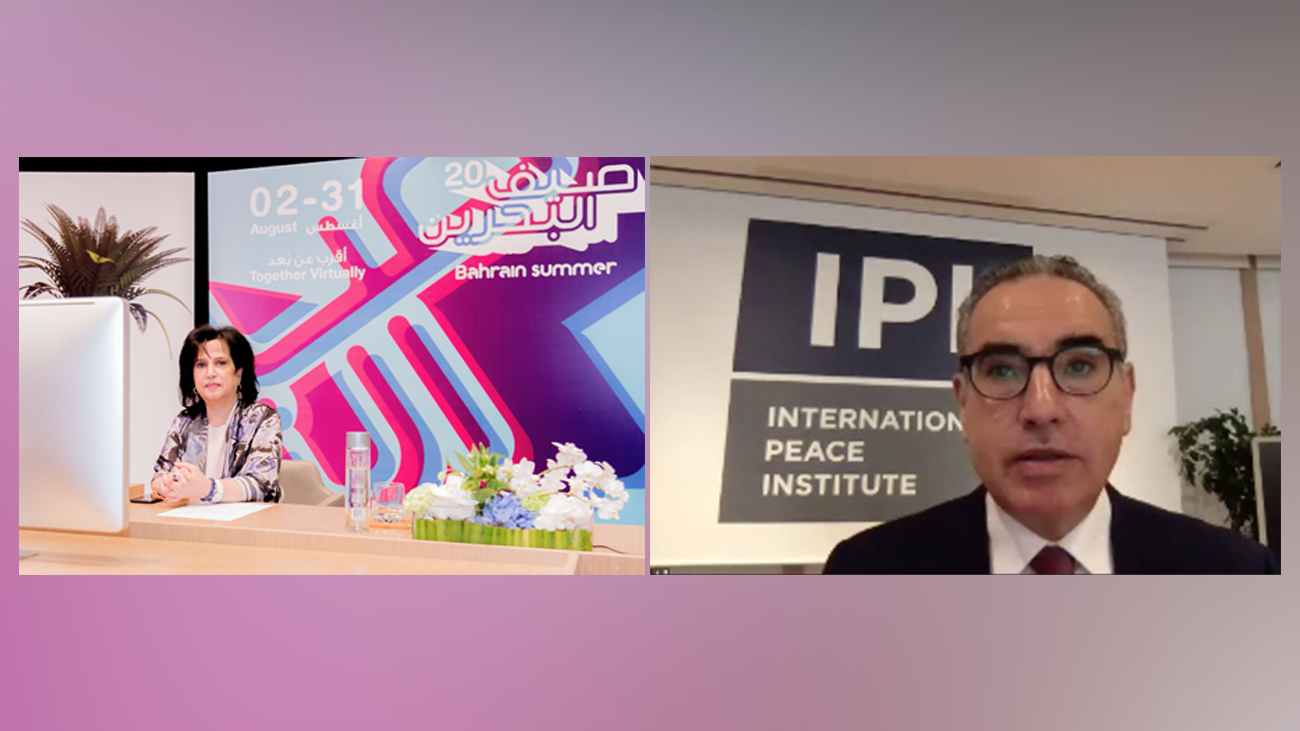 Addressing the Bahrain Authority for Culture & Antiquities (BACA) and diplomats on July 26th, IPI MENA Director Nejib Friji highlighted the important roles education and youth have in cultivating a culture of peace, commending BACA’s efforts to pass the cultural message to the future generation as agents of change.

Leading the webinar, H.E. Sheikha Mai bint Mohammed Al Khalifa, President of the BACA, pointed out the importance of promoting the culture of peace through the cultural seasons organized by the Authority, especially during the Bahrain Summer Festival, in which large numbers of children and youth come together. Sheikha Mai said the participation of 15 embassies during the celebration’s 12th year represents clear support of multiculturalism and the values of peace, coexistence, and respect. She said that this year’s program, under the slogan “Together, Virtually,” emphasized the sustainability of BACA’s cultural projects and worked to strengthen the cultural infrastructure in the Kingdom of Bahrain.

Mr. Friji underlined the need for a culture of peace now more than ever, in light of rising national populism and unilateralism globally, which has been further exacerbated by the Covid-19 pandemic. He called for the exploration of connections between culture, peace, security, and sustainable development to build a foundation for mutual respect, prosperity, and broad-based inclusion. Mr. Friji commended the festival’s emphasis on inclusion in relation to online educational activities, at a time when youth could learn from their communities about building resilience, tolerance, and peace, amid global crises.

Sheikha Hala bint Mohammed Al Khalifa, Director General of the Culture and Arts Department said this year’s festival reflects the rich culture of Bahrain and its intangible heritage, and stressed the importance of providing continuous spaces for creativity and communication despite the extenuating circumstances of Covid-19. She hopes this year’s events will reach a wider audience using social media as the platform, and include increased participation from groups such as the youth.

The conference was attended by 18 embassies, including: the ambassadors of Indonesia, France, Japan, Korea, Pakistan, Palestine, Philippines, Russia, United Kingdom, Yemen; Charges D’affaires of Brunei Darussalam, Germany, Italy, Iraq; and diplomats from Oman, Malaysia, Thailand, and UAE, who all praised BACA’s role in sustaining the cultural movement in Bahrain and enhancing communication between the kingdom and the world.