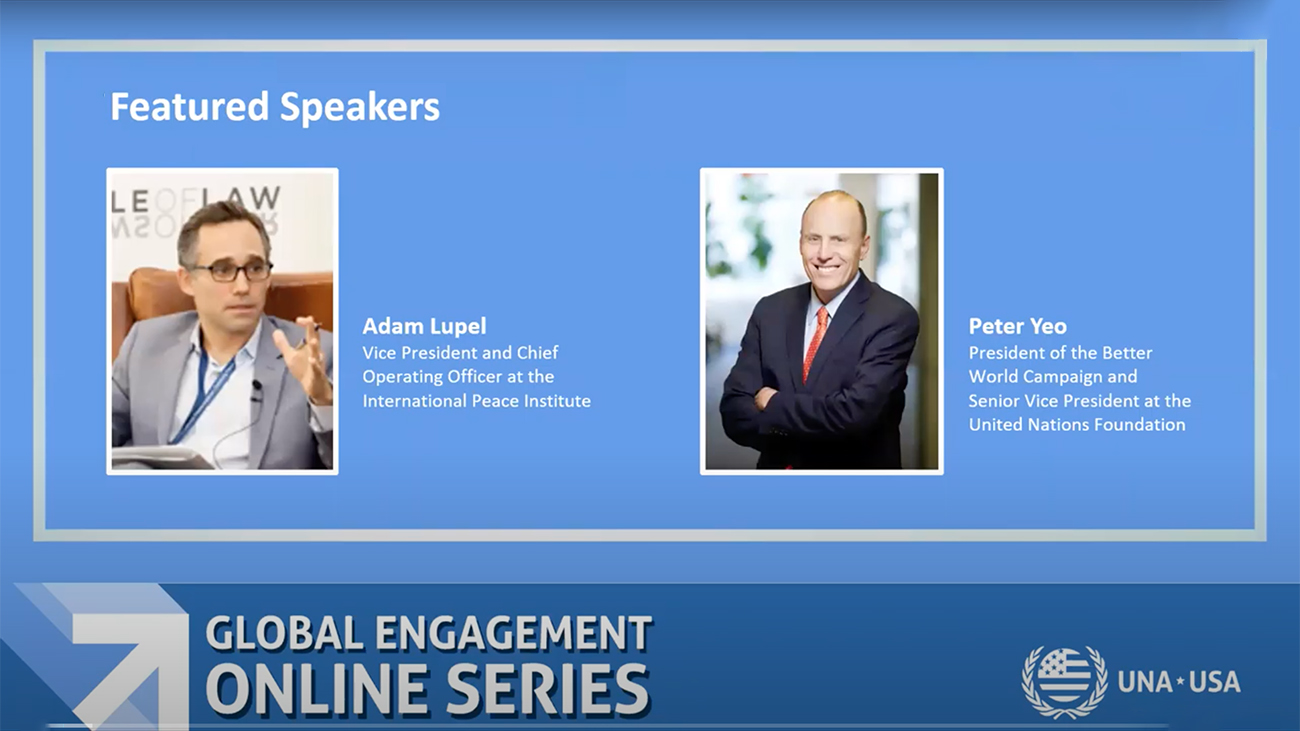 “What’s true is that a world organized by multilateral cooperation is a more just world order based upon sovereign equality of states, the rule of law, the practice of diplomacy, and not ‘might makes right’ in which a strong country can simply take territory from another country, as we saw for all of human history, up until the 20th century,” said Adam Lupel, IPI Vice President, during an event hosted by the United Nations Association of the United States of America (UNA-USA).

He added, “This is important for small countries, though the strong countries also have an interest in this system, because we all have an interest in peace, and there is no doubt statistically that interstate war has been [on] a dramatic decline since the creation of the UN.”

Dr. Lupel spoke extensively on multilateralism during a conversation with Peter Yeo, President of the Better World Organization, on July 15, 2020, at an event moderated by Rachel Pittman, Executive Director of UNA-USA.

“I think today’s context of a pandemic is a real case in point,” Dr. Lupel pointed out. “This is a global phenomenon and even the strongest country in the world can’t handle it in isolation—it’s something that we need cooperation to handle.”

“Also, it’s only through multilateral cooperation that we can aspire to do the really big things—end poverty, feed the world, combat climate change, advance human rights—things that we’re looking to do on a global scale,” he said. “And this uncertainty has only been exacerbated by the pandemic and evident divisions in the multilateral system that has made a globally coordinated response so difficult.”

In response to a question about nationalism, Dr. Lupel said, “If nationalism means isolationism and go-it-alone, it is a problem from an international perspective because it won’t lead to a safer, more secure and more prosperous nation. It will actually lead to an impoverished and more insecure nation, because there are a host of problems that can only be addressed through both cooperation and the pursuit of national interests.”

Dr. Lupel noted that the multilateral system is not just about the UN Security Council but also relates to real technical cooperation—civil aviation, the Universal Postal Union, telecommunications—”all these things have multilateral mechanisms that ease the way for us to do things that are very common, but actually would be very difficult if we didn’t cooperate internationally,” he said.

He recalled that the conversation in the lead up to the UN’s 75th anniversary “is more future-oriented. It is about recognizing global transformations and the uncertainty regarding where the international system is heading.

“Many people are beginning to speak about this moment as one of two things for the international system. It is either a moment in which long-term trends are simply being accelerated: geopolitical division, inequality, rising nationalism. Or it is a fork in the road, where we can make real change, and change direction.”

Dr. Lupel said it is likely a bit of both, “but what is clear is that the decisions being made today will have profound consequences.”

He added, “So to the extent that ‘Multilateralism is under Fire,’ organizations like the UNA-USA and IPI have a great task ahead of them to work against those trends that threaten multilateral approaches and work to improve efforts at international cooperation.”