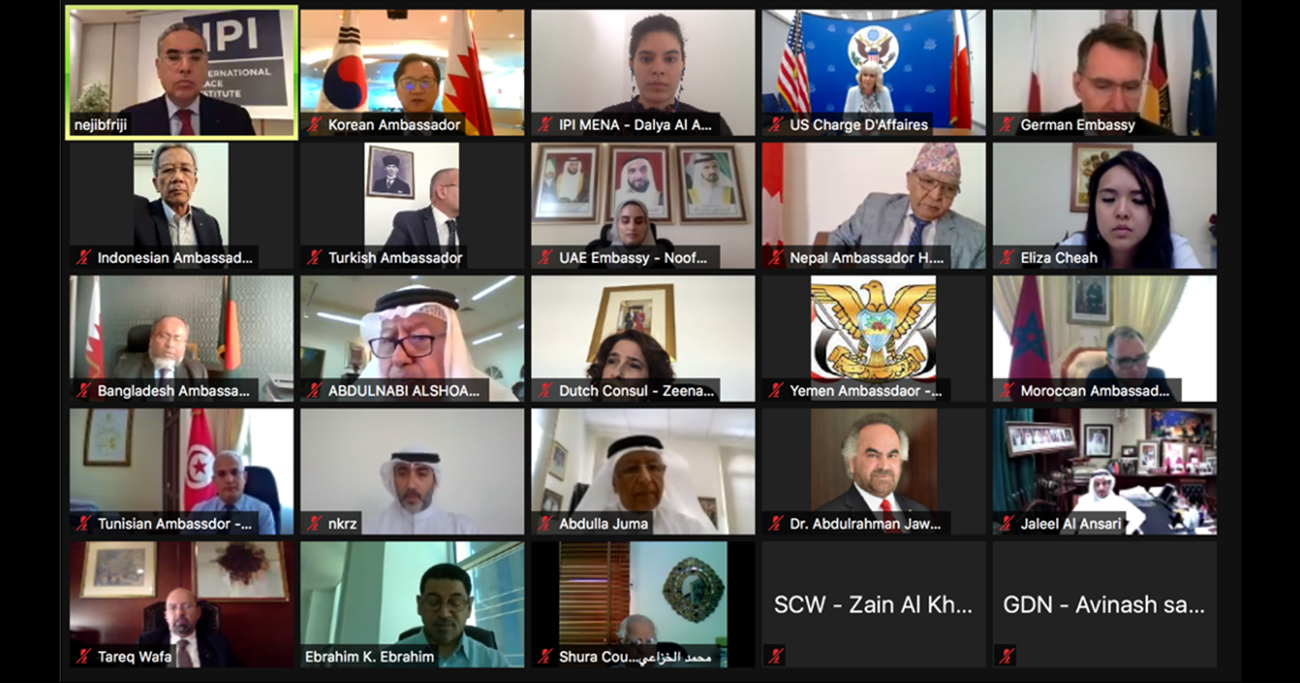 During the presentation, which was moderated by IPI MENA Director Nejib Friji, Ambassador Chung first presented the historical context of Korea’s economic ruin and reliance on foreign aid following its liberation from Japanese occupation, the advent of the Korean War, the People’s Revolution, and the multiple military coups.

“The government’s analyses into the causes of economic crises highlighted the areas for change,” Mr. Chung reflected, noting that the change in policy paradigms from a government-led economy to one that embraced “liberalization, market-orientation, stabilization” was key to Korea’s economic growth and resilience to this day.

He pointed to four key factors—state-led development plans; export and large companies-oriented policies; investment in human resources; and a strong work ethic— as well as four sustainable and inclusive growth policies—rural development, social welfare, education, science and technology investment— as the foundations of Korea’s economic growth, and ability to overcome the economic crises.

The presentation was followed by a question and answer session with government officials, diplomats, representatives of civil society, the private sector, and media.

Mr. Abdulnabi Alshoala, Chairman of Al Fanar Investment Holding, praised Korea’s short and exemplary journey to becoming a global economic powerhouse, in comparison to many developed countries in the West that have taken much longer. He also noted the role that the educational system has played, and highlighted it as an area for countries in the region to look into through further bilateral exchanges.

Mrs. Margaret Nardi, US Charge D’Affaires to Bahrain, drew parallels between Korea’s journey towards economic development and Bahrain’s current plan, noting that there are possible silver linings to the economic crisis brought on by the coronavirus pandemic. She pointed to state-led diversification programs in Bahrain as a positive first step in concerted efforts to be taken by both the government and the people.

Mr. Ebrahim K. Ebrahim, founder of Fintech Robos, underlined the need for increased exchange of business delegations and beyond, to Korea and vice versa, in order to learn and gain experiences.

Bangladesh Ambassador H.E. Dr. Muhammed Nazrul Islam suggested further collaborations with other ambassadors to encourage the sharing of knowledge, practices, and experiences, noting that “economic prosperity and peace go hand in hand.” He commended IPI MENA for organizing such a platform.

Mr. Friji closed the session by posing the age-old question of “how does South Korea view an end to the conflict with North Korea and hopefully a reunify the Korean Peninsula?”, to which Mr. Chung responded that reunification is long overdue, and confirmed Korea’s position of willingness and commitment to develop peace through dialogue.

The event was part of IPI MENA’s Ambassadorial Conferences Series.