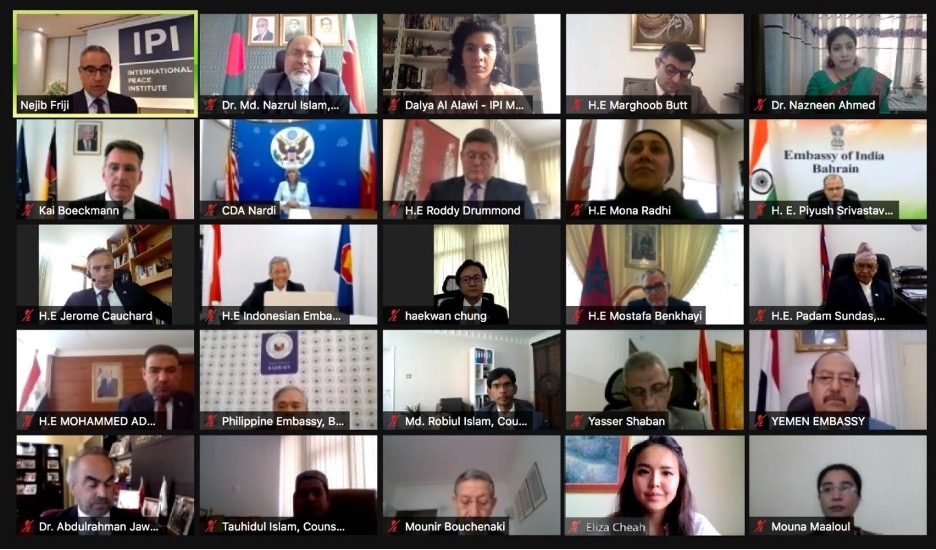 Bangladesh Ambassador to Bahrain Dr. Md. Nazrul Islam, joined by speakers from the Organisation of Islamic Cooperation (OIC) and the Bangladesh Institute of Development Studies (BIDS), launched an urgent appeal to the international community for a lasting solution to the Rohingya crisis, and urged the multilateral system to facilitate the voluntary, safe and sustained repatriation of the refugees back to Myanmar.

During an IPI MENA’s virtual Ambassadorial Conference Series on “The Culture of Peace and the Forcibly Displaced Rohingya People” on March 15, IPI MENA Director Nejib Friji opened the event by stressing the importance of a culture of peace in areas such as the promotion of human rights, women and youth, economic integration and regional integration. “In a global environment that has seen heightened rhetoric of hate, intolerance and acts of violence, the practice of the culture of peace is especially pertinent,” he stated.

Highlighting Bangladesh’s policies to integrate and put to practice a culture of peace, Dr. Nazrul Islam emphasized that inclusive growth-led policies, namely empowering women, change lives through development. He pointed to Bangladesh Prime Minister, Sheikh Hasina, a woman at the helm of a Muslim-majority country, as a role model through her policies towards aiding the 1.2 million Rohingya refugees hosted in Bangladesh.

Dr. Nazrul Islam elaborated on Bangladesh’s efforts within the multilateral system to facilitate the voluntary, safe and sustained repatriation of the Rohingyas back to their homeland in Myanmar, stressing, “By ensuring justice and accountability, reaching the culture of peace becomes linked to eliminating the culture of impunity.”

A Senior Research Fellow at BIDS, discussant Dr. Nazneen Ahmed noted BIDS independence as a think-tank that conducts policy research on socio-economic development issues within Bangladesh. She acknowledged that while 20% of the country’s 160 million people still live under the poverty line, Bangladesh’s decision to invest in women and children’s education will decrease disparity, and put the country’s projected “developed” status by 2041 within reach.

She regretted Bangladesh’s limited resources and called for support from the international community, stating, “non-financial means of support such as regional integration agreements, are equally crucial to maintaining and achieving peace.”

Mr. Marghoob Saleem Butt, Executive Director of the OIC Independent Permanent Human Rights Commission (IPHRC), noted that Bangladesh, a member of the OIC since 1974 with a vast Muslim population, holds strong values in line with the culture of peace and underlined OIC’s similar commitments to advocating human rights and peace.

Mr. Butt stated that “adopting a Culture of Peace, starting with the overhaul of the education system and aligning policies within a human rights framework, are keys to successful development.” He stressed that an all-inclusive approach involving broader civil society and political leadership in Myanmar must pave the way for peaceful coexistence.

German Ambassador to Bahrain, Kai Boeckmann, questioned the role of the UN in enabling a voluntary, dignified, and safe return of the Rohingyas, to which Dr. Islam reiterated Bangladesh’s engagement with the relevant UN agencies, such as the UN Human Rights Council and the General Assembly. Mr. Butt suggested the UN Security Council (UNSC) impose concrete measures to bring the refugees back through a phased program.

United States Charge D’Affaires to Bahrain, Margaret Nardi, expressed the US’ continued support to Bangladesh regarding the Rohingya crisis as a partner within the UNSC. She referred to US sanctions on Myanmar’s military officials and the freezing of over $1 billion in funds in the country as a means to put pressure towards a democratic process.

UN Educational, Scientific & Cultural Organization (UNESCO) Advisor and Bahrain Authority for Culture and Antiquities (BACA), Mounir Bouchenaki expressed concern over the loss of cultural heritage, intangible and tangible, during times of crises to which Dr. Islam replied urging the international community’s support in initiating projects that will assess and take necessary steps to preserve cultural heritage at risk of being removed.

Indian Ambassador to Bahrain, Piyush Srivastava, commented on India’s shared interests of working with Bangladesh to resolve the crisis and expressed hope in the international community’s cooperation towards aiding the Rohingya people.

Moderating the panel, Mr. Friji pointed to the recent concerns regarding Bangladesh’s relocation of the Rohingyas to Bhasan Char island. Dr. Islam emphasized that the temporary facilities and measures were put in place after appropriate assessments of the island, assuring that no efforts are being spared to help protect the Rohingya, and pointed to Bangladesh’s recent vaccination campaigns against COVID-19 to the Rohingya refugees in his country.

Participants of the webinar included representatives of the diplomatic corps, government, civil society, private sector, as well as the media.