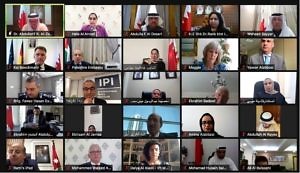 During a virtual conference on March 8th that brought together around five hundred participants, H.E. Abdul Latif bin Rashid Al-Zayani, Minister of Foreign Affairs, opened the event by underscoring the significant progress and continued efforts that Bahrain has made toward women’s affairs, which has contributed to the kingdom’s successful development over the years.

H.E Hala Al Ansari, Secretary-General of the Supreme Council for Women (SCW), reiterated Bahrain’s active commitment to further women’s participation in the international arena, with regard to women in diplomacy, citing membership to several United Nation bodies for women, and Bahrain’s chairing the 36th session of the Arab Women Committee of the League of Arab States in 2017.

In light of the workshop’s theme of women’s rights and achieving family and community stability, Al-Ansari stressed the ‘importance of enabling women to practically and realistically exercise their rights as human beings under the auspices and protection of the state of law and institutions.’ She expressed the SCW’s priority in continuing to work closely with stakeholders to ensure the full implementation of the rights stipulated in the country’s constitution, which were explicit in the aspect of equal rights and duties among its citizens, women and men.

Mr. Abdullah bin Faisal bin Jabr Al-Dosari, Assistant Minister of Foreign Affairs, presented a comparison on women’s rights in international standards and national applications, by giving an overview to some of the kingdom’s international achievements in the field of women’s rights, that have led to feats in the family unit.

During his intervention in the plenary session, Mr. Friji encouraged Bahrain’s commitment toward achieving sustainable social and economic development, through the inclusion of women throughout legislation and long-term initiatives. He pointed in particular to the National Action Charter, noting it had the active support from and for women throughout its implementation that “sheds light on developing visions that protect childhood and the family to achieve equality among all citizens without any discrimination.”

Ms. Susanne Michael, Regional Director for the Arab States of UN Women, reiterated how women’s leadership throughout the pandemic has demonstrated how the empowerment of women would not only garner significant contributions to the economy post-Covid-19, but also results directly in a stronger family unit. Therefore, “boys and men are not only vital allies but main beneficiaries when it comes to women empowerment.”

Dr. Akram Khalifa, the Regional Adviser on Gender Equality and Women’s Empowerment Issues (UN ESCWA), stated that gender should be integrated into all aspects of national policies, strategies, and action plans, through mainstreaming a gender perspective in national policies and considering gender issues in all aspects of their implementation, monitoring and reporting.

Roueida El Hage, Office of the United Nations High Commissioner for Human Rights (OHCHR) MENA Representative, cited the obstacles that women continue to face in gaining equal rights as men, as these are based on social structures and power relations that frame everyday life. However, she acknowledged the great strides that have been made in the kingdom to minimize these problems in the last decade alone, which has resulted in the improvement of the rights for women and girls.

All speakers paid homage to the women who are on the frontlines fighting the pandemic, and agreed on the need for a holistic community effort during the post-Covid-19 recovery and beyond, in the economic and social realms.