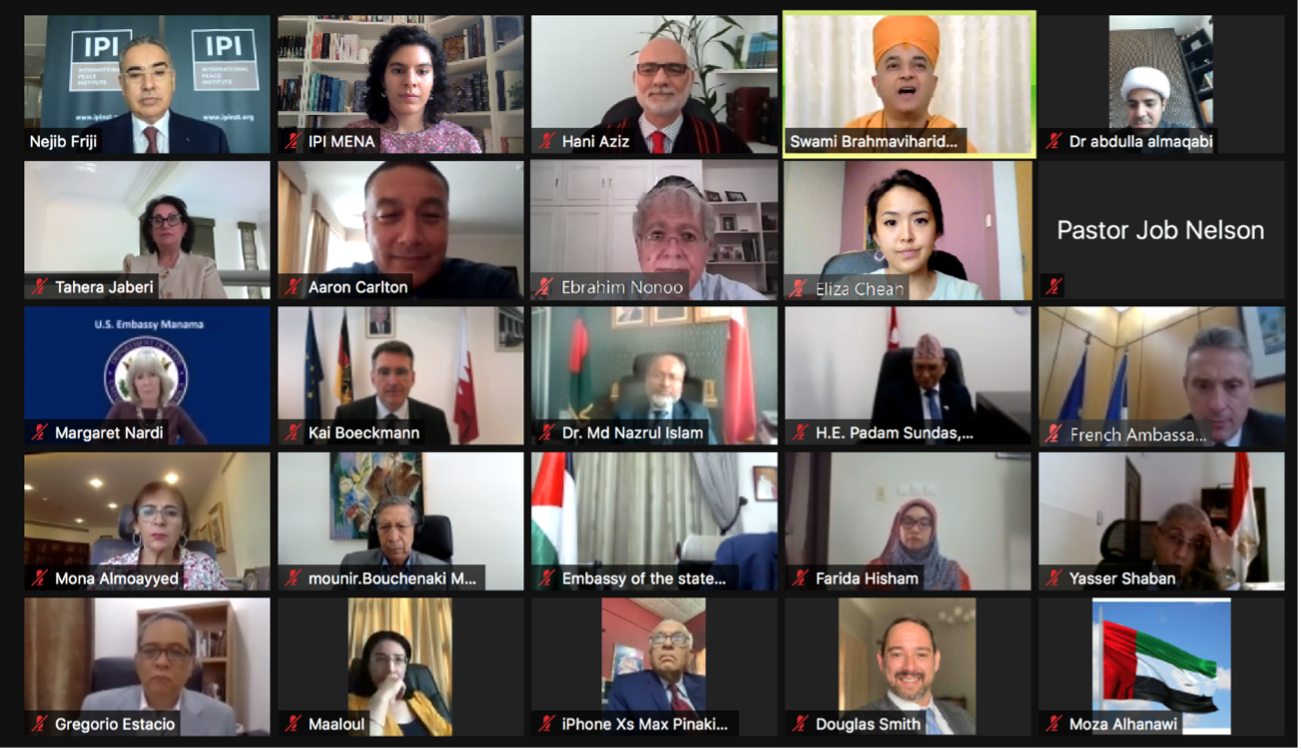 A collection of interfaith leaders convened by IPI MENA came together on April 27th to reaffirm their commitments to promoting peace, dialogue, and sustainable development.

During the interventions, French Ambassador Jerome Cauchard emphasized how good education is a prerequisite for the new generations, wherein empathy and the ability to mutually respect and understand each other can lead to peace.

In reference to the increasing number of violent and hate crimes in the United States, US Charge d’Affaires Margaret Nardi reminded the audience of the importance of the diplomatic corps in that, similar to religion, “embassies try to create relations on a personal level, meet them as a person and see their humanity,” which has become particularly important this year during the pandemic.

German Ambassador Kai Boeckmann drew attention to the German Task Force on Religions of Peace that was established in 2016. Ambassador Boeckmann noted the common objective between interfaith leaders and diplomats to “build trust, protect the weak, and strive for stability.”

Mounir Bouchenaki, Advisor to Bahrain Authority for Culture and Antiquities and the United Nations Educational, Scientific and Cultural Organization (UNESCO), advanced UNESCO’s message on the culture of peace; “through knowing cultural heritage, through education, appreciation of the other, and knowing the other that we can avoid the unfortunate situations of terrorism and massacres of people.”

IPI MENA Director Nejib Friji opened the webinar, “Interfaith Dialogue: Solidarity for Peace,” by paying homage to Stephanie M., a French police officer and the latest victim of violent extremism in the name of religion. Following a moment of prayer and meditation for all victims, Mr. Friji strongly condemned any acts of violent extremism in the name of religion committed by individuals, groups, or states and called for greater solidarity, partnership, and cooperation at all levels through a “message of tolerance, mutual respect, and peace.”

Addressing interfaith leaders of Baha’i, Jewish, Christian, Islam, and Hindu denominations, Reverend Hani Aziz, President of the White Flags Association, Pastor of the National Evangelical Church, and co-organizer of the webinar, reminded the audience that the “true enemy is ignorance and intolerance.”

In light of the numerous religious celebrations that coincide with the Spring season, Ms. Tahera Jaberi, Representative of the Baha’i Faith, noted the celebration of Nowruz, Baha’i New Year, is “a time for renewal and reawakening,” not just in the physical world, but the spiritual one, too. “Religion can be seen as a system of knowledge and practice that offers insights and values that can help societies advance.”

Pastor Job Nelson of Bethel Church of Nations in Bahrain, also shared how the celebration of Easter symbolized a season of hope and coexistence, serving as a time for endurance, resurrection, and restoration.

Mr. Ebrahim Nonoo, Representative of the Jewish Community and President of the Association of Gulf Jewish Communities, followed suit by identifying the core message of all holy books as underlining the workings of all societies, “the glue of respect for each other and the acceptance of all religions.”

Chaplain Aaron Carlton, US Naval Forces Central Command, Fifth Fleet Chaplain, expressed his purpose and intent to promote peace, understanding, and dialogue while Pastor Blaine Newhouse, National Evangelical Church, shared his commitment to working toward justice, reconciliation, and peace through faith with those who are likeminded.

Following the interfaith interventions, the virtual floor was opened to a large audience comprising of diplomatic corps, private sector, and media.